This essay was published on Lapham’s Quarterly website in July 2011. 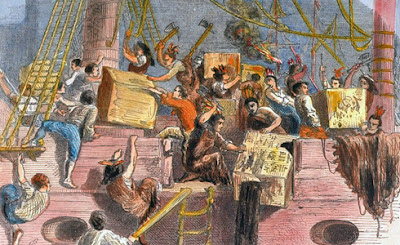 The first populist tea party movement came in the form of colonial-themed dinners during the centennial celebrations in 1873 and 1876, marking key events related to the country's hundredth birthday. These modest social gatherings featured simple colonial fare quaintly described in an antiquated style of English. When colonial-themed dinners came back into fashion in the early 1890s, they were decidedly different in character. Indeed, the second wave of tea parties was part of a nativist movement that came about in reaction to the large number of immigrants arriving in the United States.
Read more
Posted by Henry Voigt at 8:58 PM 1 comment:

Let There Be Peace 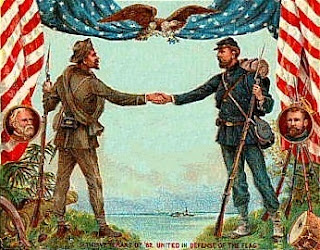 One hundred and eighty-nine Union veterans from Newark, New Jersey boarded a train in October 1883 heading for Richmond where they would attend a banquet with their former enemies in the Civil War. When I discovered a menu from this dinner, oddly printed on a Confederate banknote, I became curious about this unusual reunion in the former capital of the Confederacy.

Read more
Posted by Henry Voigt at 8:42 AM 4 comments: