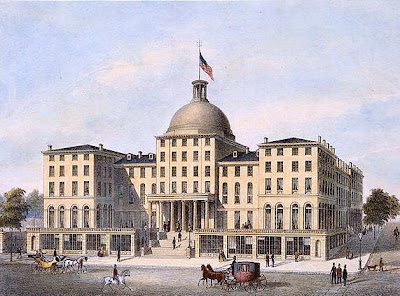 When the Burnet House opened in Cincinnati in 1850, the London Illustrated News called it “the finest hotel in the world.” Located on the corner of Third and Vine Streets, the five-story building was designed by architect Isaiah Rogers, already well-known for Boston’s Tremont House (1827), New York’s Astor House (1836), and the Exchange Hotel (1841) in Richmond. Crowned by a dome forty-two feet in diameter, the hotel featured panoramic views of the Ohio River and the Kentucky hills. Large, ornate, and expensive, the Burnet House catered to a well-to-do clientele, as shown by two menus, one reflecting a passing social custom, the other reminiscent of a historic event for which the hotel would be long remembered. 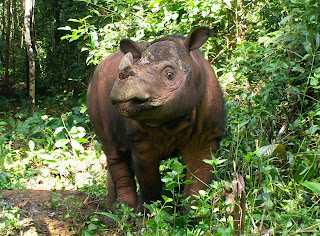 While the word “carnivore” is now used to describe flesh-eaters, modern society may still find use for the obscure term “zoophagy,” meaning the eating of animals. Since zoophagy usually connotes the eating of exotic creatures, it certainly can be used to describe a banquet in 1905 at the Astor Hotel in New York, where a Bornean Rhinoceros from the Berlin Zoo was served as the main course.