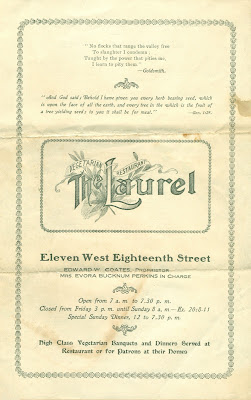 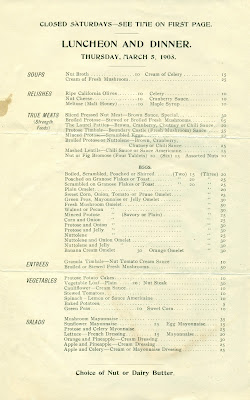 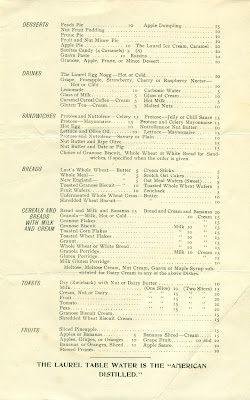 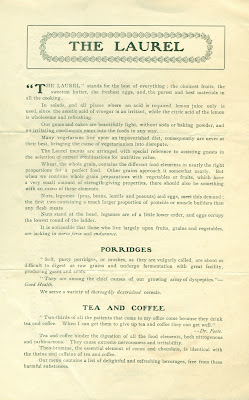 Vegetarianism, which has roots going back to antiquity, surfaced in western countries during the mid-nineteenth century. The American Vegetarian Society was founded in 1850, just a few years after the word “vegetarian” was coined. After establishing a chapter in New York in 1852, the society planned to hold its annual dinner at the Chinese Assembly Rooms, a large hall at 539 Broadway, as shown by this admission ticket.3 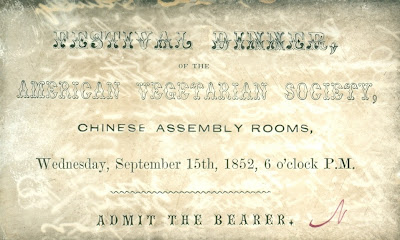 Despite having distributed the tickets, the dinner in 1852 was cancelled. With their first meeting reduced to a series of speeches, the organizers put a good face on the situation, promising that the event would be a “feast of reason.” Such pronouncements only invited ridicule by the newspapermen who enjoyed mocking the vegetarians. The New York Times reported that the philosophical repast “was not as inviting as the pumpkin pies, melons, peaches, pears, grapes and apples that were first offered, if we may judge by the scant attendance." In fact, only fifty people attended. Things went much better the following year when newspaper editor Horace Greeley hosted the annual affair. This dinner attracted about 300 socialists, abolitionists, temperance advocates, and other antebellum reformers. Two-thirds of the attendees were women, including the suffragettes Susan B. Anthony, Lucy Stone, and Amelia Bloomer.

The dinner in 1853 featured tomato and rice soup, Graham bread, fruited bread, mixed-fruit cake, wheat cakes, corn blanc mange, apple biscuits, molded rice, molded farina, and molded wheat grits. There were two vegetables—baked sweet potatoes and stewed squash with cream—and a wide variety of fruit. The desserts included pumpkin pie, baked apples, coconut custard, and ice cream. Although the banquet was seemingly successful, it marked the end of the “first wave” of vegetarianism. After inching forward for two decades in the United States, the vegetarian movement went into hibernation, not to reawaken until the end of the century.4

By the time the Vegetarian Society held its dinner at the Laurel in 1904, such events were no longer considered newsworthy since the novelty of vegetarianism had worn off. None of the dishes on the banquet menu below corresponds exactly to those on the à la carte menu from the previous year. Still, many of the dishes are similar in that the restaurant relied heavily on protose and nuttolene, the canned meat substitutes produced by Kellogg’s Sanitas Nut Food Company in Battle Creek, Michigan. Protose comprised peanuts and wheat gluten; nuttolene, which appears on this banquet menu in the form of cutlets, was a baked peanut pâté that was sliced for cooking. Nut chowder, the first course at this banquet, could be made with either of these “vegetable meats.” The other ingredients included chopped hard-boiled eggs, strained tomatoes, sautéed onions, thyme, sage, and bay leaves. 5 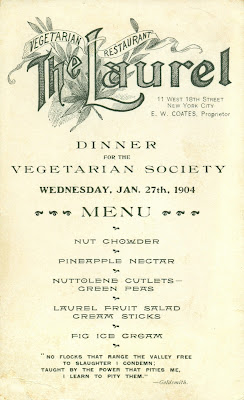 In 1904, people adopted a plant-based diet based on their religious beliefs, health issues, or opposition to the killing of animals, a sentiment reflected by Goldsmith’s poem. Today, the reasons for vegetarianism have expanded to include ethical concerns related to the mass consumption of meat, such as the treatment of animals in factory farms, environmental damage, and the exacerbation of world hunger.


Notes
1. Christian author Ellen G. White (1827-1915) summarized the pro-grain, anti-meat beliefs of the church, writing that “grains, fruits, nuts, and vegetables constitute the diet chosen for us by our Creator.” She also believed that “a religious life can be more successfully gained and maintained if meat is discarded, for this diet stimulates into intense activity lustful propensities, and enfeebles the moral and spiritual nature.”
2. E. W. Coates operated a small heath food store before opening the on August 27, 1902. The Seventh-day Adventists regarded it as their second vegetarian restaurant in . (The first was Health Restaurant at .) “Another Vegetarian Restaurant,” The (Vol.01-04) 63.
3. In 1859, the old Chinese Assembly Rooms, situated on lower Broadway near Spring Street, were converted into a concert saloon named the Melodeon. Featuring “pretty waiter girls,” watered-down drinks, and dancing, the Melodeon is often cited as one of the first nightclubs.
4. Karen Iacobbo, Vegetarian America: A History, 2004.
5. Edward Fulton, Substitutes for Flesh Foods: Vegetarian Cook Book, 1904.
Posted by Henry Voigt at 2:18 PM

Fascinating post. The menu is a gem. What is mysterious to me, though, is why no cheese?

What you won't come up with next! This is delightful and a jewel of New York history. The mid 20th century New York I grew up in, had quite a number of truly superb vegetarian restaurants. In fact, I never encountered the same phenomena in Europe.

This is indeed fascinating!! I can't wait to read it more thoroughly when I have some more time. Thank you for posting!!

I loved this menu! It was so lengthy with many excellent choices. Thanks for your explanations of meat substitutes produced by Kellogg's.

I thought I would share a menu that comes from the St. George's Cafe (in St. Martin's Lane), London, a vegetarian restaurant visited by the prominent critic, Nathaniel Newnham-Davis at the turn of the twentieth century:
Hors-d'oeuvre
Mulligatawny soup or Carrot soup
Flageolets with cream and spinach
Fried duck's egg and green peas
Lent pie or Stewed fruit
Mixed salad
Cheese
Dessert

Newnham-Davis' Hors-d'oeuvre consisted of some olives. He enjoyed the carrot soup, but found the spinach "not up to club form" and the flageolets "not inviting." He enjoyed the duck's egg that had been well fried. Newnham-Davis ate his salad, passed on the Lent Pie (not sure what that was) and the stewed fruits, and then finished off with Gruyere cheese, almonds, raisins and an orange. His meal cost 1 shilling, 6 pence--quite a modest price.

While Newnham-Davis was not overly impressed with the St. George's Cafe, he at least decided that it was important enough to visit and review for his column in the Pall Mall Gazette, and then later for his collection of restaurant reviews, Dinners and Diners: Where and How to Eat in London (1899, revised 1901).