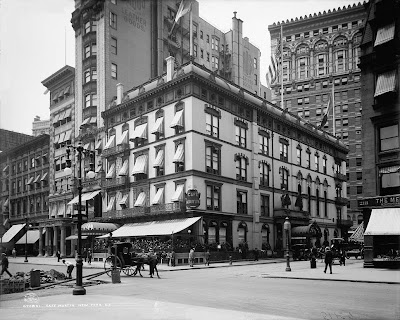 By the late 1890s, the neighborhood surrounding Madison Square Park had lost some of its luster. After being the center of New York’s social scene for twenty-five years, its leading hotels and restaurants began to close. Delmonico’s, which had moved there from Union Square in 1876, now relocated to Fifth Avenue and 44th Street. Despite this notable departure, Madison Square was still a stylish part of town, prompting Jean and Louis Martin to take over Delmonico’s lease on the 26th Street location, well-situated between Fifth Avenue and Broadway. The French-born brothers refurbished the old building, giving it the latest flourishes of Art Nouveau design, and renamed it the Café Martin.
Read more
Posted by Henry Voigt at 10:39 AM 10 comments:

Europeans visiting the United States in the nineteenth century were fascinated with how quickly Americans ate their meals, especially lunch. By the 1890s, there were a number of new options for those in a hurry. In addition to lunch wagons and cafeterias, there were small restaurants that served the so-called “quick lunch.” It was these that most captured the European imagination, for there were no such eateries in Europe at the time. In 1892, French writer Paul de Rousiers described the scene at one of these lunch places in his travelogue La Vie Américaine:

“Lunch time, the streets fill once more. In New York nobody goes home in the middle of the day. They eat wherever they happen to be: at the office, while working, in clubs, and in cafeterias…In blue-collar restaurants, thousands of people eat standing up, with their hats on, all in a line, like horses in a stable. The food is fresh and appetizing, though, and prices are lower than ours. While lines of men dug into plates brimming with meatballs, others wait to take their place.”