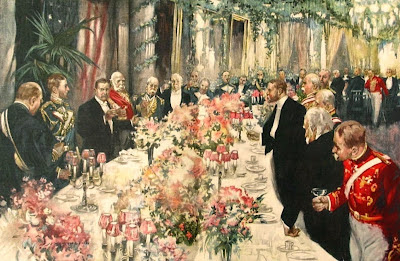 There was an intriguing story behind the menu that supposedly came from the state dinner in 1902, hosted by President Theodore Roosevelt for Prince Henry of Prussia. The biggest issue was its monotone blue cover, unlike the full-color menus seen at the dinner. Then there were two small advertising cards still tucked inside, one noting that the menu was provided compliments of George Kessler, the clever importer of Moët & Chandon Champagne, and the other touting his product’s popularity. The menu reveals a curious incident in presidential history, orchestrated by Kessler to promote his products. Known as the “Champagne King,” he led a colorful life, distinguished by high living, intermittent disasters, and a celebrated act of atonement, making his one of those uniquely American stories.
Read more
Posted by Henry Voigt at 9:23 AM 2 comments: