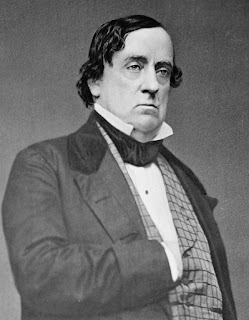 Eight counties, ten small cities, thirty townships, and numerous streets, schools, parks, and lakes are named after Lewis Cass. Born in New Hampshire in 1782, Cass had a long and distinguished political career at a time when many places in the country needed names. After serving as a brigadier general in the War of 1812, the rugged-looking statesman was appointed governor of the Michigan Territory. In 1831, he became the Secretary of War and was later sent to France as the American Minister, a post he retained for six years. Shortly before returning to the United States in November 1842, Cass was honored by the American expatriate community at a farewell dinner at Les Trois Frères Provençaux in Paris.
Read more
Posted by Henry Voigt at 8:08 AM No comments: 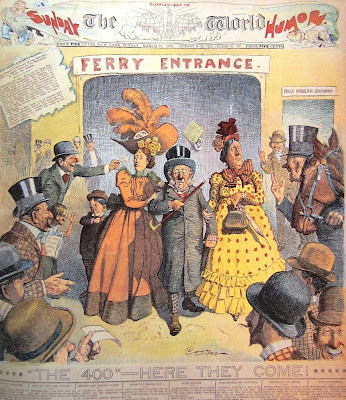 The scene is still funny. Appearing in the Sunday comic section of the New York World in March 1899, the first cartoon in a series, it shows a prosperous miner from Montana named “Slagg Diggins” stepping off the ferry with his wife and daughter, ready to enter high society.1 The headline warns the city’s well-established aristocrats, popularly known as “The 400,” of the arrival of this newly-minted millionaire, much to the amusement of the city’s masses who were well aware of the societal shift then taking place.
Read more
Posted by Henry Voigt at 9:12 AM 3 comments: