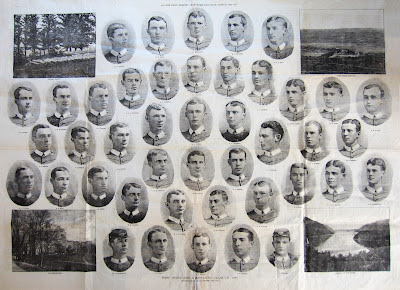 When the class of 1888 graduated from the U.S. Military Academy in June, there were so few of them that The Daily Graphic, an evening tabloid in New York City, had no trouble arranging their photographs on its two-page spread.1 Beginning their military careers during the final conflicts of the Indian Wars, some of these cadets would serve in the Spanish-American War, the Philippine Insurrection, the Mexican Expedition, and World War I. Harkening back to the Victorian era in which they were trained, five menus provide a glimpse of the foodways at West Point during the mid-1880s. However, some of the menus convey a deeper meaning, for they were saved by men who unexpectedly died while still young. Not in battle. Though in one case through a selfless act of heroism. How these menus came to be preserved, and what this may tell us about the long cycle of mourning caused by a sudden death, adds a poignant dimension to these minor historical documents.
Read more
Posted by Henry Voigt at 4:14 PM 3 comments: