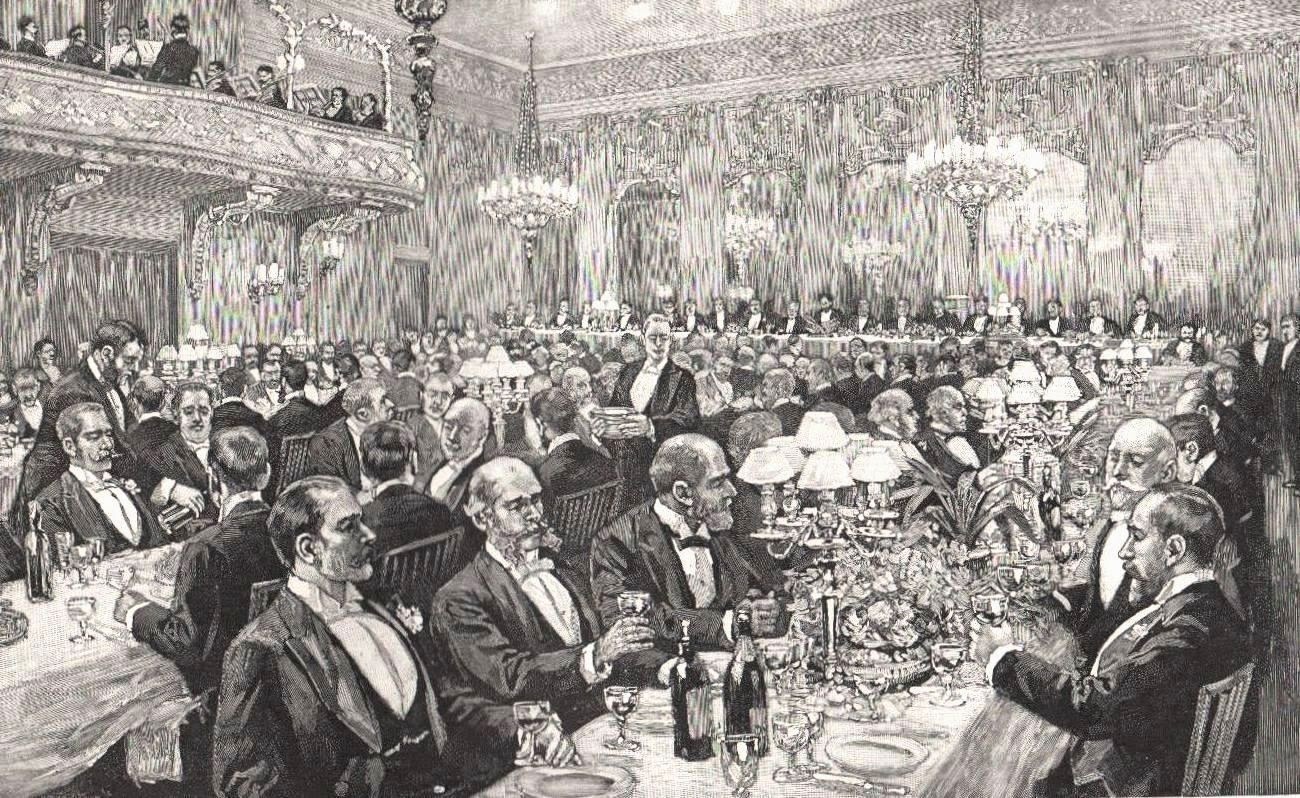 When eight-year-old Virginia O’Hanlon asked her father in 1897 whether Santa Claus really existed, he suggested she write to The Sun, one of New York’s prominent newspapers.  The editorial response, which included the famous line “Yes, Virginia, there is a Santa Claus,” became part of American folklore. More conservative than The Times and The Herald Tribune, The Sun reflected the preoccupations of upper-class society, often marveling at the inner-workings and outward manifestations of wealth during the Gilded Age. For example, in October 1894, the paper interviewed Chef Charles Ranhofer at Delmonico’s, calling the luxury restaurant “a wonderful machine.” Almost every night during the social season, there was a large dinner in the third-floor banquet room of its Madison Square location, where course after course arrived promptly from the basement kitchen. The article, illustrated below with four menus from the period, describes the organizational efficiency of a fine dining establishment at the fin de siècle.1

“Mr. Ranhofer is a big, good-natured Frenchman, who is very reticent over his success as a master of gastronomy…His office is so situated in the center of Delmonico’s kitchen that he can reach any part of his domain at a moment’s notice. To the left is the ice cream and pastry section. To the right the experts in meat, poultry, and fish have their departments. In the center the supplies for immediate use are stored, and along the opposite end is a row of ovens and ranges. The forty odd cooks under Mr. Ranhofer are as perfectly trained and drilled as a regiment of soldiers. They are formed into companies under the supervision of assistant chefs, who are responsible to Mr. Ranhofer for everything that comes within their departments. Four cooks rule over the roasting ovens, and eight men in the meat department devote their time to preparing the meats for the four roasters. Four men are responsible for the vegetables and fried dishes. Pastry in its various forms is in the hands of four experts. Three men make the ice cream. Two men make confections and cakes alone. Bread making is an art in itself, in charge of three bakers. Eight men are kept in reserve to clean up things and assist generally, and ten women and two men are occupied in washing pots and kettles and cleaning dishes. Over all the force Mr. Ranhofer keeps his eyes. He is familiar with the specialty of each of his cooks. He can give a scullery man points on scrubbing a soiled pot as well as tell the man in the meat or in the roasting department how to prepare a canvasback duck; he can judge an undercrust with the same certainty that he can bon bons, mottoes, or odd confections. 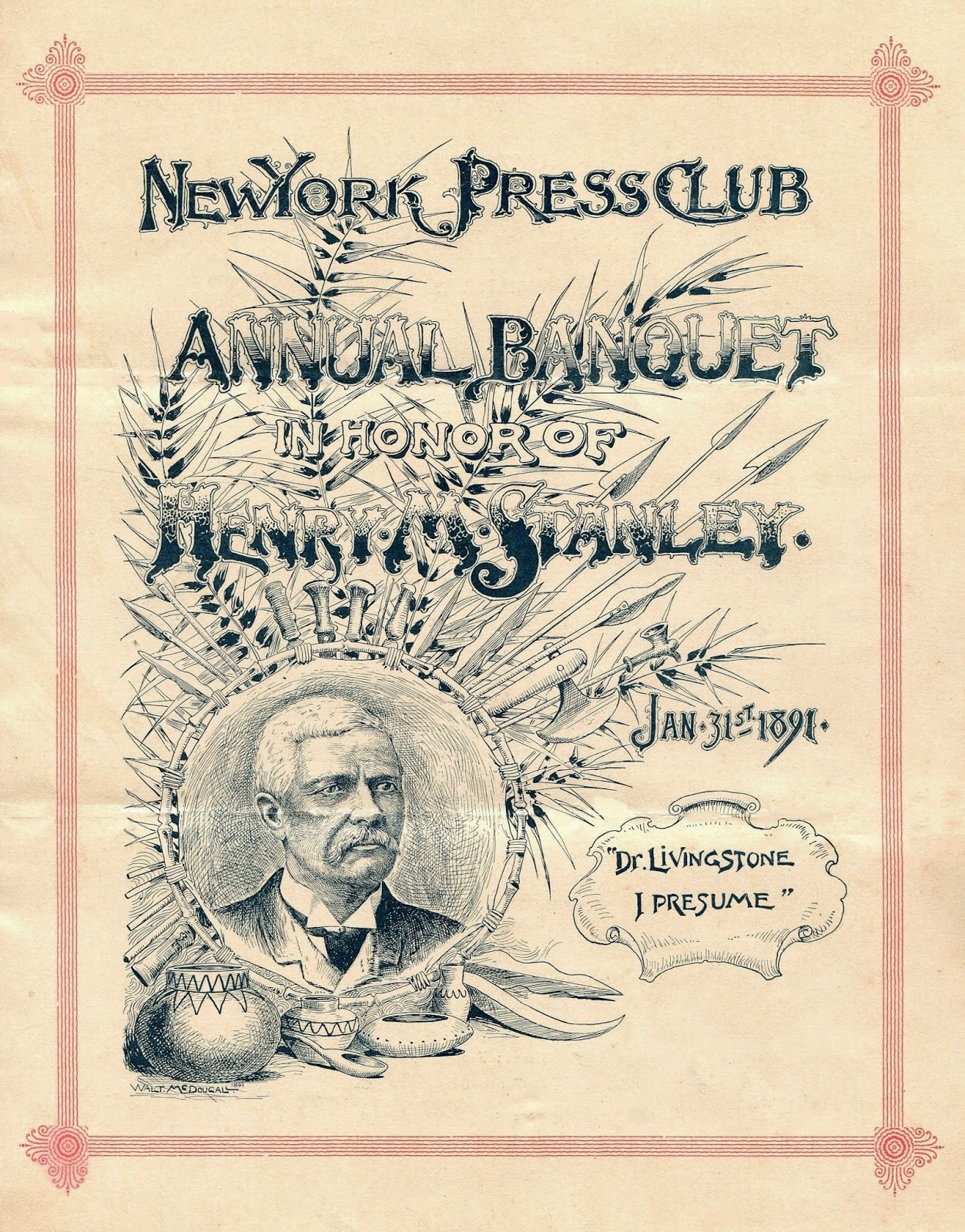 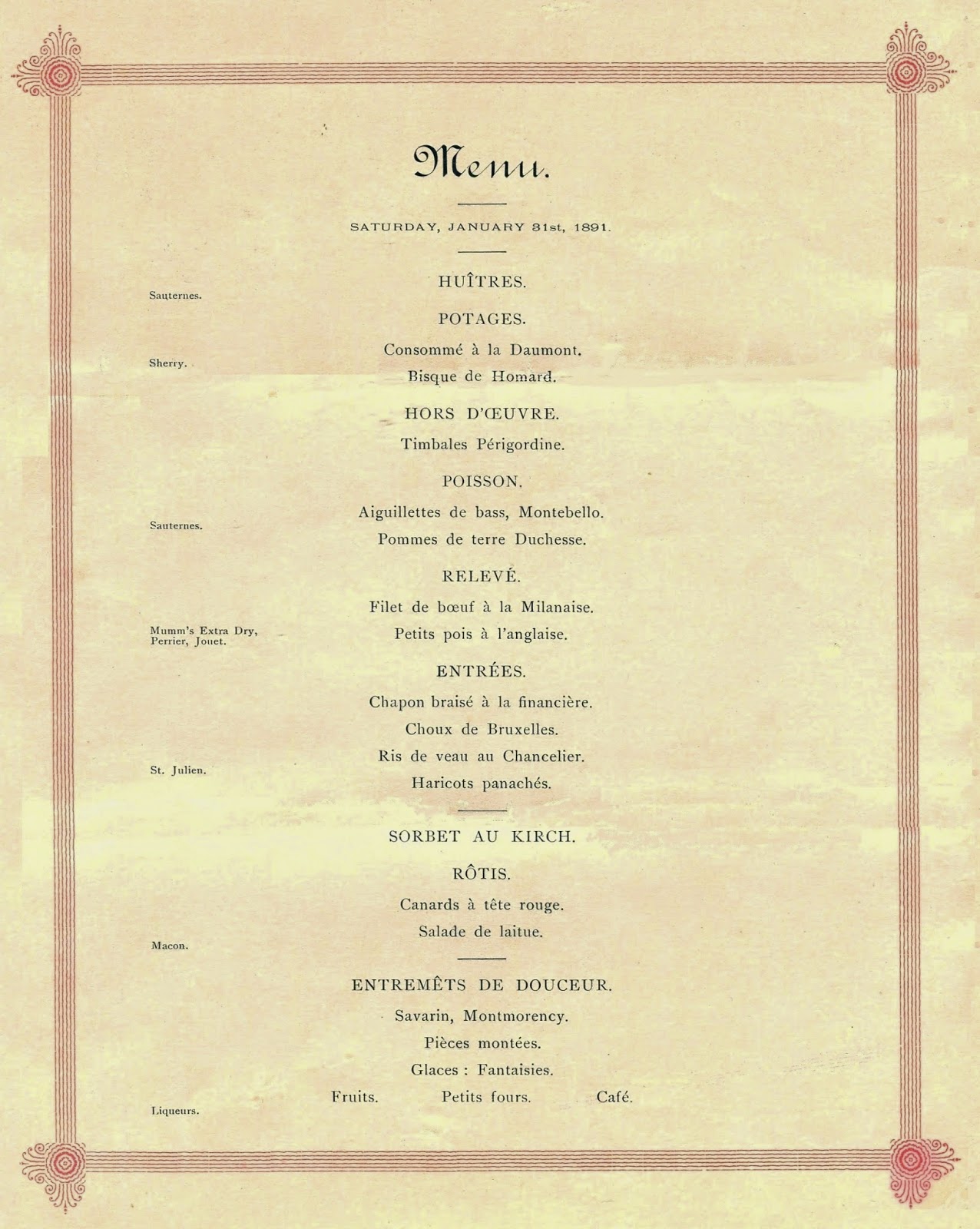 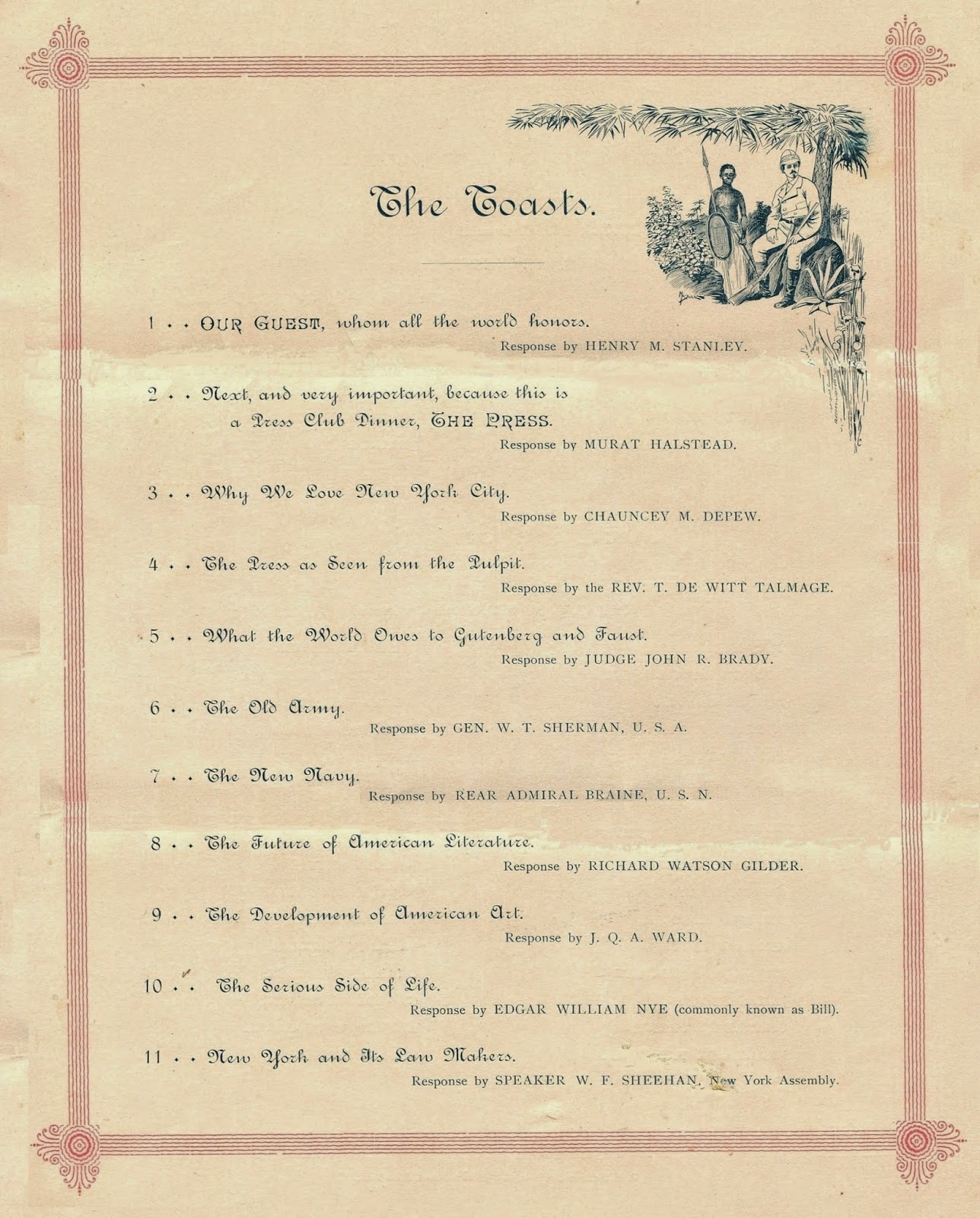 “When the dinner hour arrives the machinery of the service is set in motion by Mr. Ranhofer in the kitchen and by Eugene Garnier, the maitre d’hotel, in the banquet room. The head waiter looks for a glance from the matre d’hotel. Thirty waiters, one for every ten persons, stand silently by, expecting a look from the head waiter. The manager says ‘all right’ to the head waiter, the head waiter waves his hand at the waiters, and the thirty men go to their assigned places at the tables. The head waiter has divided the men under him into squads of six or ten, and has given the best waiter in each squad instructions to keep a watchful eye over the more inexperienced men. The matre d’hotel communicates through a speaking tube with the chef. 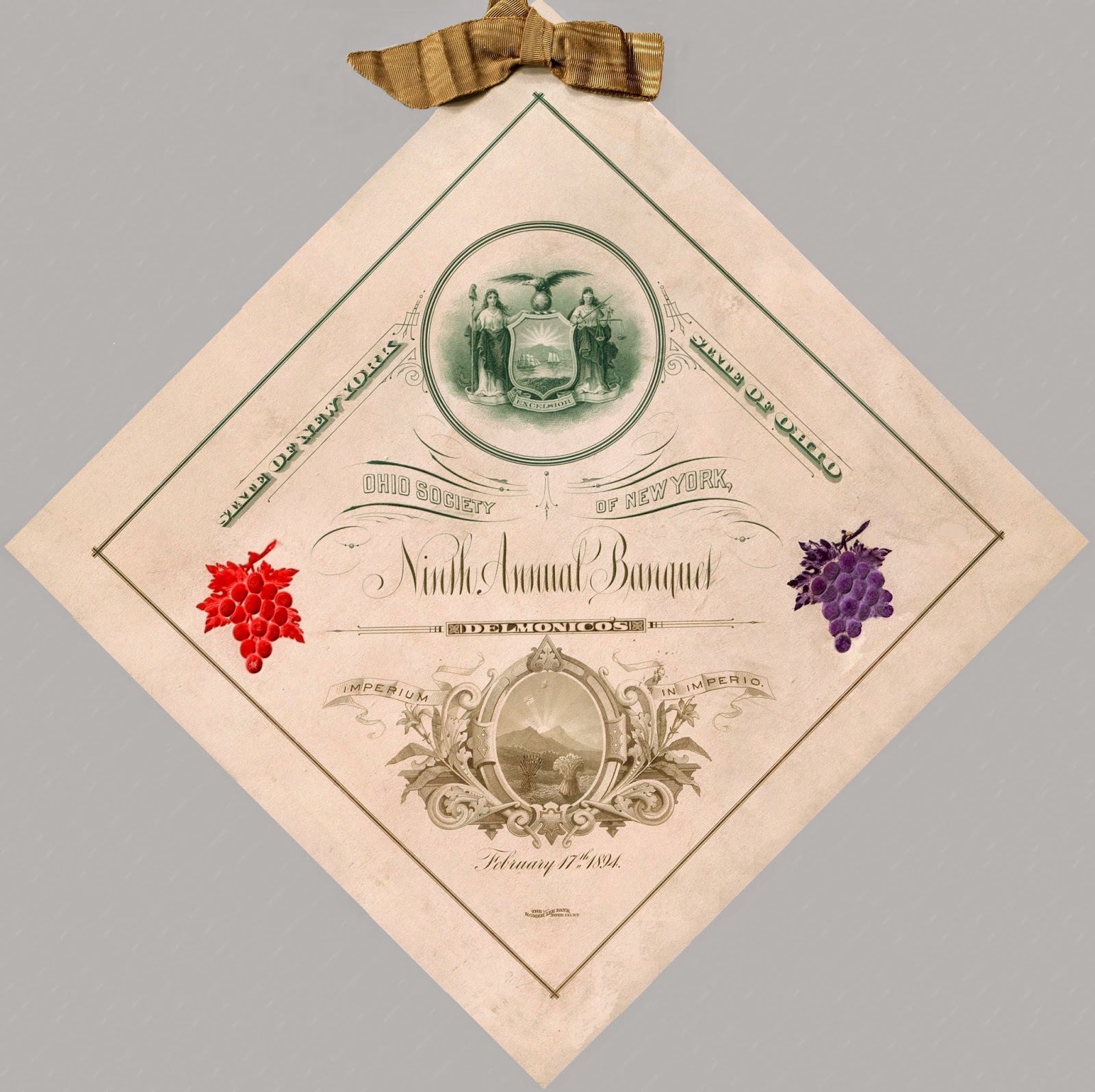 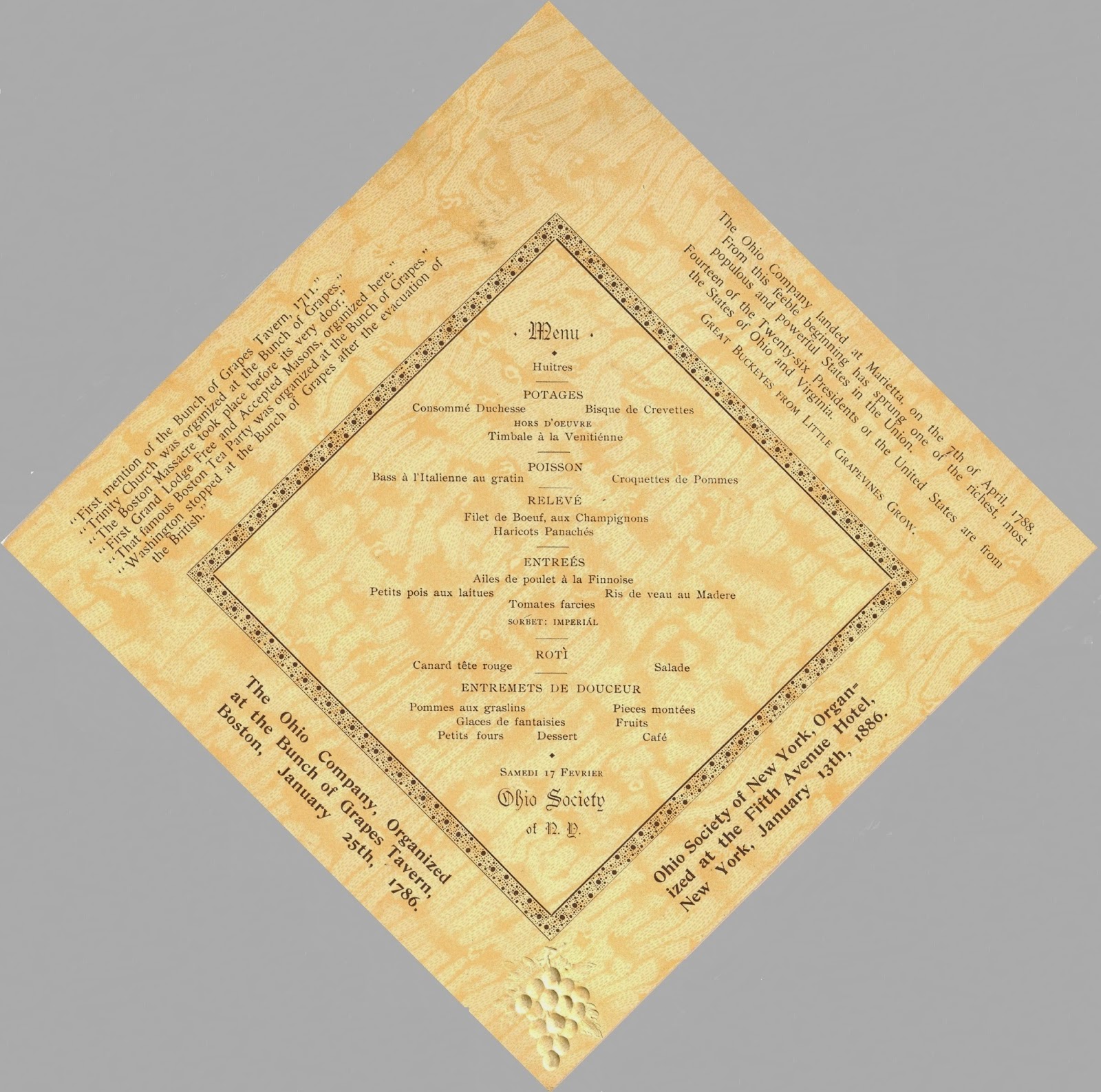 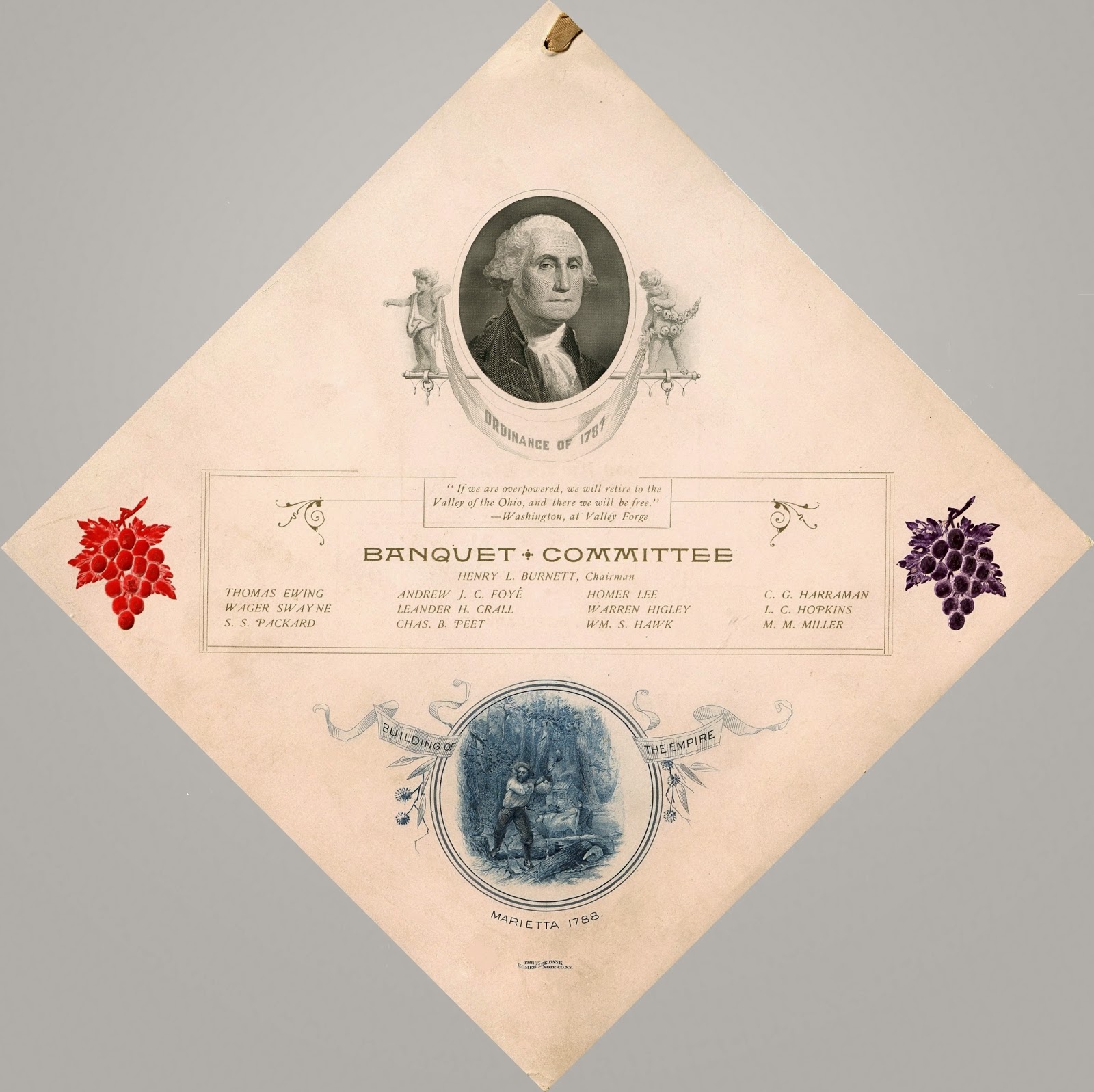 “In the kitchen the forty cooks stand silently in their various departments. They are not permitted to talk more than is absolutely necessary. When the manager has told the chef to go ahead, the cooks in charge of the coppers of soup send up the dumb waiter to the pantry on the banqueting room floor two tureens of soup. The carver, who acts as an intermediary between the cooks and the waiters, stations himself in the pantry. His office is one of the most responsible of all in connection with the banquet. In serving the soup and the other dishes he must use keen judgment, so that all of the diners shall be equally served, and that without waste. The soups are cooked in advance, and kept hot in closed pots immersed in hot water. In making the soup the cooks work on a basis of one quart to four to six persons, although in most restaurants the portions are not so generous. 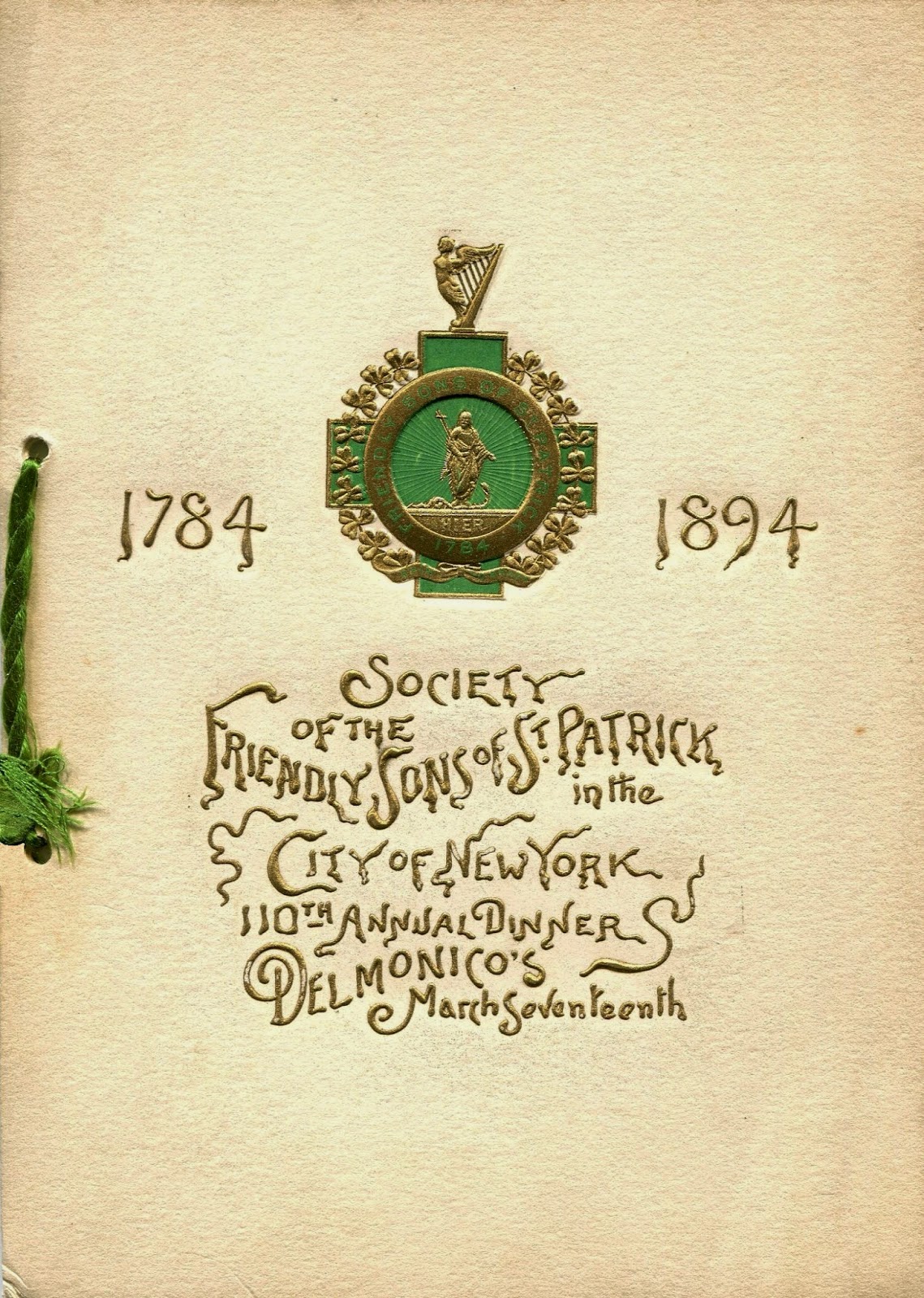 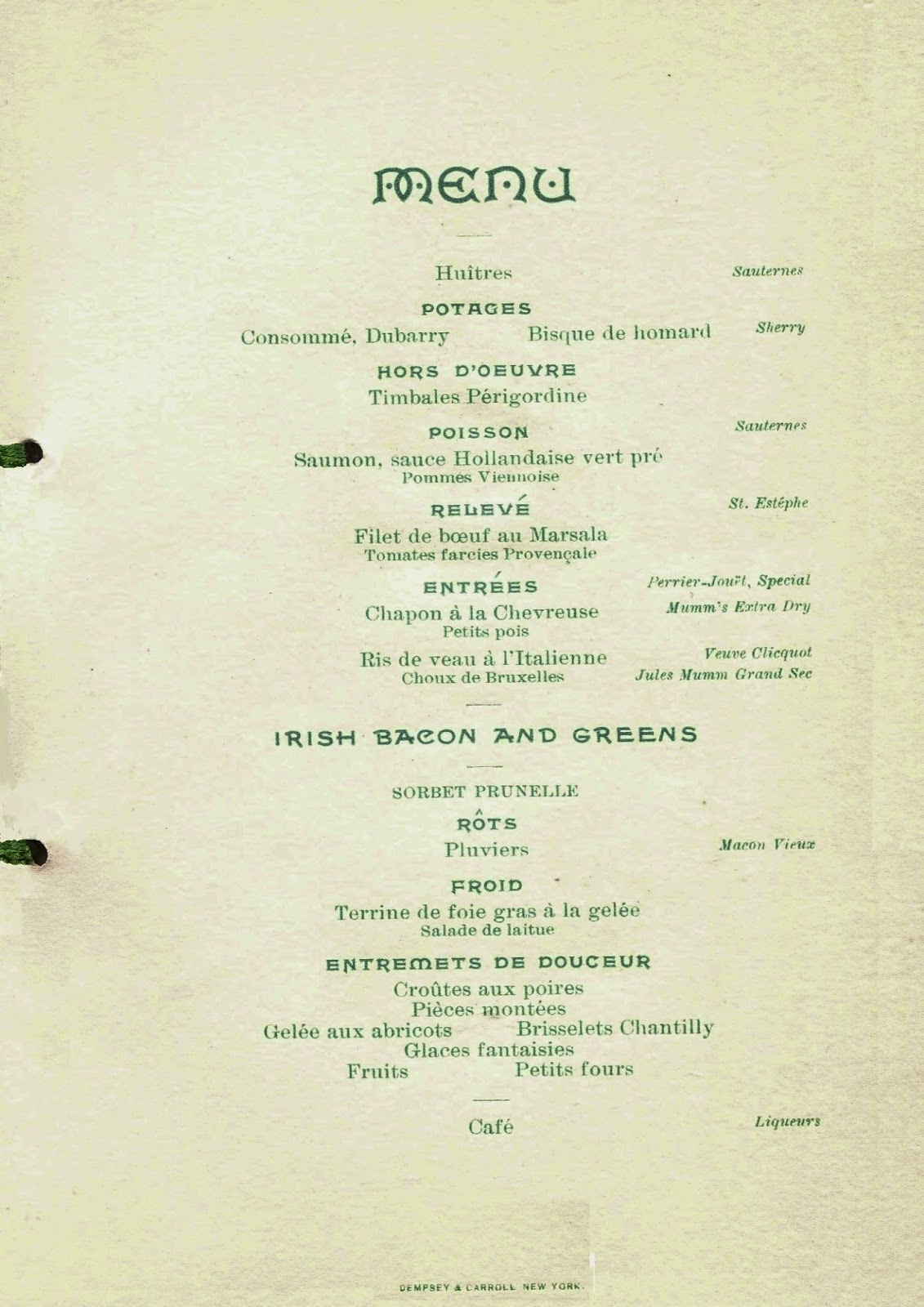 “When the soup has been sent up from the kitchen, down the speaking tube comes one word, ‘Next!’ and the timbales à la Marly are hurried up the stairs. The fish has been prepared in advance of the dinner, and the four frying cooks stand in readiness to take from the warming closets the sole, which is nearly 100 pounds in quantity. When the call of ‘Next!’ comes down the tube again the fish is hurried up to the carver, who apportions the course out to the waiters, with potato croquettes which come from four vegetable cooks. The saddle of venison is called from the four roast cooks, and then the highest ingenuity of the carver is called into play. The sight of him as he slices the huge chunks of venison into portions of equal size with quick and graceful motions would make the most confident Father of a family ashamed to sit at the head of his domestic board. So closely can the skillful carver adapt his material to the number of diners that when the musicians take their share hardly enough meat is left for a two-portion stew.

“The entrees are cooked in the order of service. While the banqueters are eating their venison the eight men in the meat department have sent the pullets to the roasting cooks, who make ready the pullet à la Moray for the first entrée. While the pullets are being prepared, the vegetable cooks are frying the artichoke bottoms, the meat cooks are putting on the cutlets, some of the assistants are getting the string beans ready for service, 100 terrapins have been turned over by the men in the meat room to the roasting cooks, and the seven men in the ice cream and pastry sections, who have been comparatively idle up to this point, get the sherbets, hot entremets, and ice cream ready to send up. The canvasback ducks receive the attention they deserve. One word from the matre d’hotel promptly brings each course to the floor above. 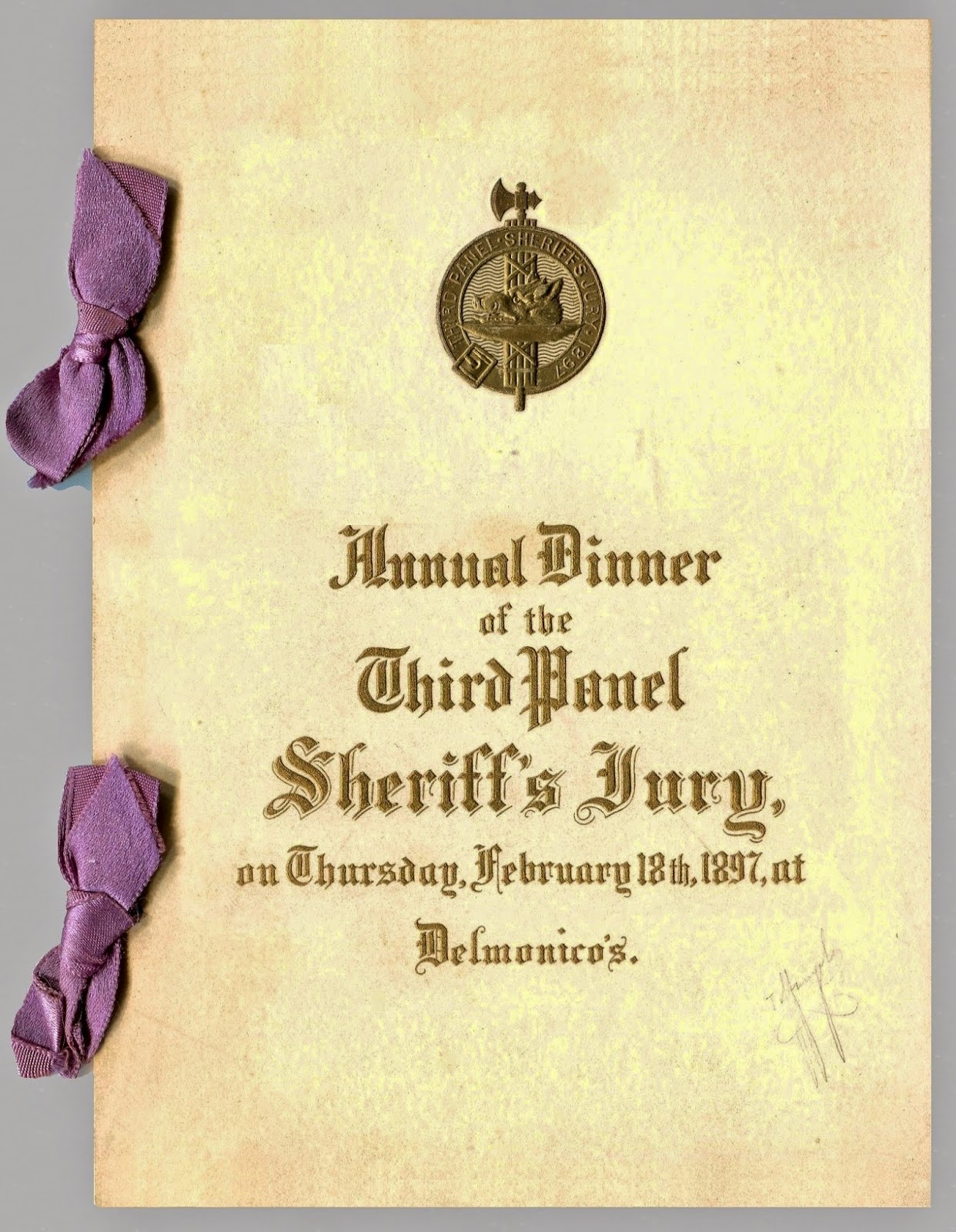 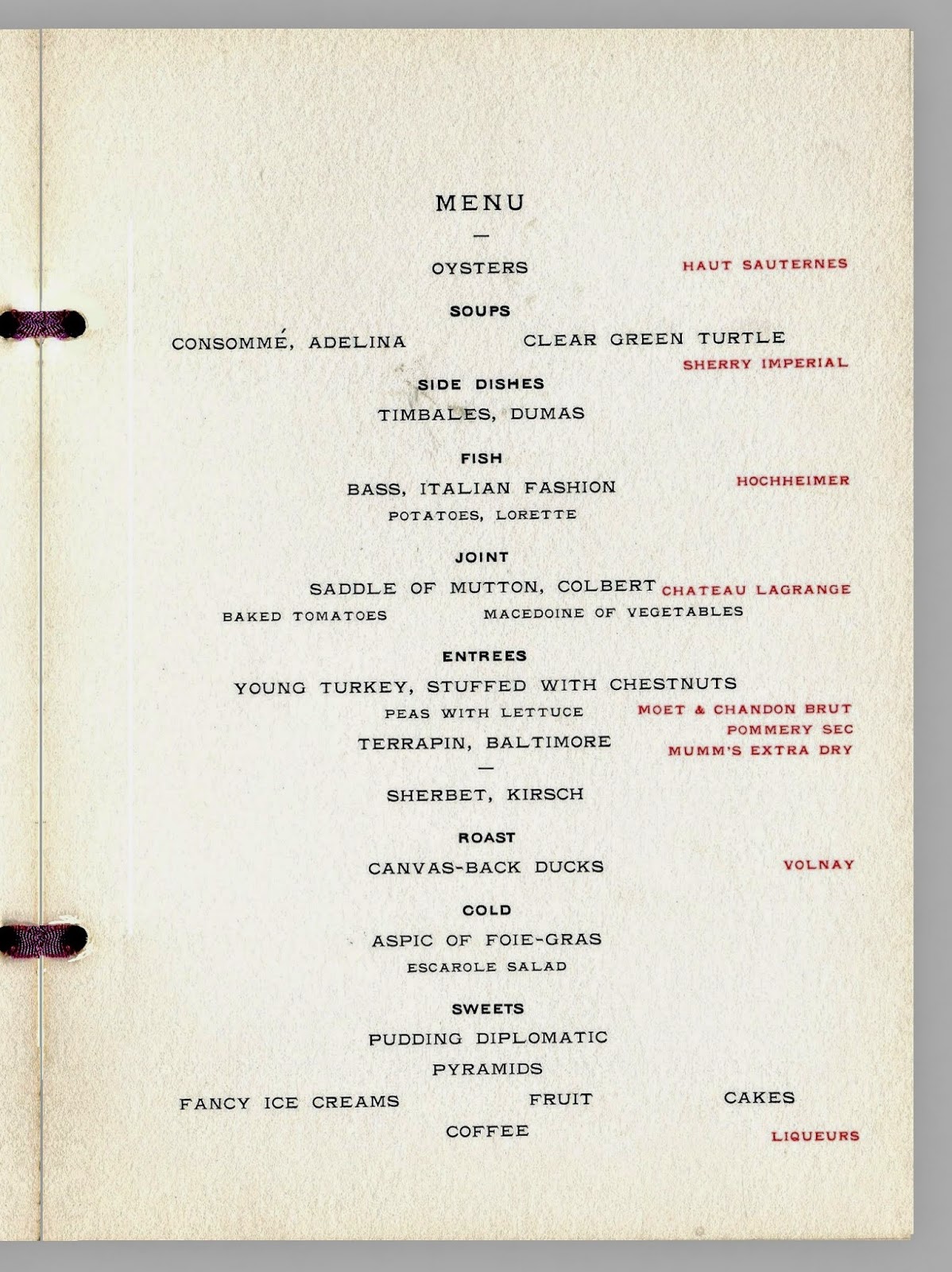 “The wines, fruits, cigars, coffee, cheese, and liqueurs come within the province of the matre d’hotel. His bottle opener holds very much the same office as the carver, though the responsibility is not so great. When the roast has left the hands of the four roasting cooks, the strain in the kitchen begins to lessen. The roasting cooks, soup cooks, vegetable and frying cooks, and the men in the meat room, look on at the bustling men in the pastry, ice cream, and confectionery departments, and listen to the rattling of the pots, kettles, pans, and dishes in the scullery. The forty cooks are a tired lot of men when the banquet is over, and glad enough to hear the chef say ‘au revoir.’ An hour after the 300 people have been served the kitchen and the scullery are as quiet as a sacristy. The table and benches have been scrubbed, the ranges have been closed, and the stone slabs are spotlessly clean.”