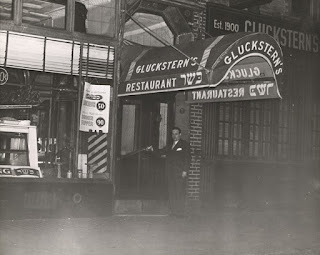 The Dairy Restaurant is a fascinating new book by writer and cartoonist Ben Katchor. Jewish dairy restaurants attracted patrons who followed the dietary laws that forbid the mingling of meat and any milk-based product, and those who simply yearned for the comforting dishes of Eastern European Jewish cuisine, such as borscht, salmon, potato latkes, blintzes, and kreplach (small dumplings filled with cheese).1 These eateries are now almost completely gone, barely leaving a trace. The surprising lack of primary source material prompted me to take a fresh look at menus in my collection from Jewish restaurants of all kinds. Two in particular caught my attention. They came from Gluckstern’s and Isaac Gellis which were kosher meat restaurants on opposite ends of Manhattan. The menus were saved in 1948 by an anonymous couple who marked the dishes they ordered with X’s or O’s. The simple notations evoked a reminiscent feeling similar to what one reviewer described as Katchor’s “melancholy yiddishkeit,” recalling bygone eating places that were once a part of everyday life.
Gluckstern’s
January 25, 1948
Gluckstern’s was located on Delancey Street, one of the main thoroughfares on the Lower East Side. While each ethnic group of Jewish immigrants brought a somewhat different cuisine, the Romanians and Hungarians were regarded as the best restauranteurs.2 Opening at the turn of the last century, Gluckstern’s was known as a Roumanian [sic] restaurant, identifying it as a type of steakhouse that specialized in “broilings.”3 Roumanian restaurants attracted a broad cross section of New York society.
The menu bears the Yiddish Hebrew term for kosher (כּשר‎), signifying the restaurant operated in accordance with Jewish dietary laws. The address of the entrance on Norfolk Street is also shown on the cover. 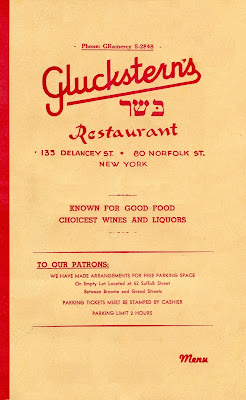 Pickled fish and various forms of herring are the only seafood dishes on the menu. Lungen stew, which could be ordered as an appetizer or main course, was cow’s lung cooked with onions and garlic. The Romanians were said to use garlic the way Hungarians used paprika. Stuffed miltz (cow’s spleen) was another age-old dish of Eastern Europe. Sometimes these organ meats were combined, such as the lungen and miltz stew at Lou G. Seigel’s restaurant on West 38th Street in the Garment District. The use of offal is currently making a comeback at restaurants that employ “nose-to-tail cooking” in which the entire animal is used.

The flavorful Roumanian tenderloin could be either a skirt steak, or a hangar steak, both of which were inexpensive cuts at the time.4 Big spenders could opt for the tender musch steak (ribeye). Interestingly, the menu on this day did not offer karnatzlach, the small, garlicky sausages that were popular.

The two diners ordered from the set menu of “deluxe dinners.” This bill of fare is bordered by notices that state “this is our only store” and “we have no connection with any other store bearing our name.” They reflected an ongoing feud and lawsuit between founder Simon Gluckstern and his brother Louis who opened a competing restaurant.5

The four-course meals shown below cost $2.00 each, or about $22 today.6 Chopped chicken liver was a favorite appetizer at Roumanian steakhouses. Mandel soup was possibly chicken soup with croutons of a biscotti-type, almond bread found in Ashkenazi Jewish cuisine.
Guest “X”
Chopped Liver
Mandel Soup
American Tenderloin Steak
Fruit Ices
Guest “O”
Grapefruit Juice
Buckwheat Grit (Kashe) Soup
American Tenderloin Steak
Apple Strudel
The beverage list on the back includes slivovitz, a fruit brandy made from damson plums that is produced throughout Central and Eastern Europe. The sour cherry brandy called vishniac was provided by the Zwack distillery in Budapest. In the past, vishniac was customarily made at home, ensuring a batch was ready for festive holidays. In addition, there is tokaji szamorodni, a sweet wine from northeast Hungary, and a selection of Palestine wines. 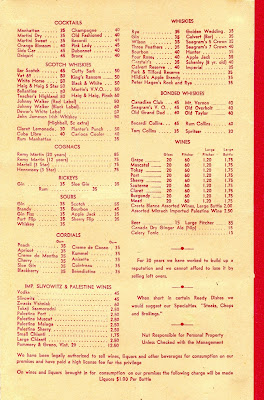 Gluckstern’s hosted special occasions such as weddings and bar mitzvahs, making it the subject of family stories and jokes. One memoirist remembered her father saying “What is this, Gluckstern’s?” whenever a waiter started to clean the table before he was finished eating.
Isaac Gellis
February 12, 1948
Lithuanian-born Isaac Gellis and his wife Sarah opened a kosher butcher shop at 37 Essex Street on the Lower East Side in 1872. They later distributed bologna, pastrami, and other provisions to delicatessens in New York and then around the country. Gellis was known as the “kosher sausage king of America.”7 This restaurant and delicatessen opened on West 72nd Street in 1927. As shown, the branch was managed by Fine and Schapiro in 1948. 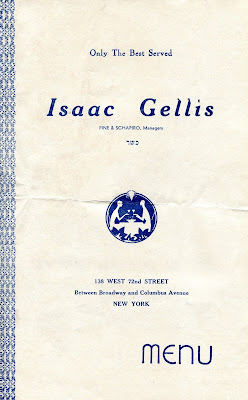 The seafood dishes are confined to herring and gefuelte fish (ground, deboned, and poached carp, typically served with horseradish). These fish were staples of the dairy restaurants. 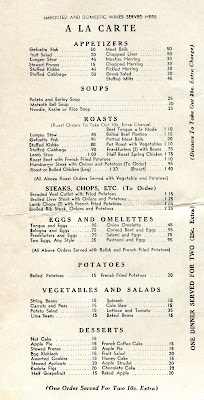 The choice of sandwiches includes the “72nd Street Special” made with turkey, tongue, and cole slaw. At Rueben’s, a non-kosher restaurant then on East 58th Street, this sandwich was named “Vic Damone” after the pop singer. Add swiss cheese and Russian dressing to this combination and you had a “Jack Benny.” 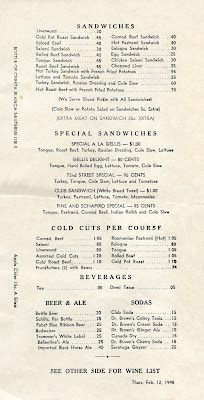 The diners again ordered from the set menu. The notice at the top reads “no butter or milk served,” indicating strict compliance with the dietary laws. 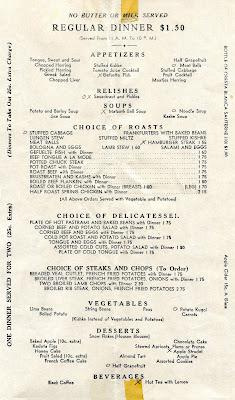 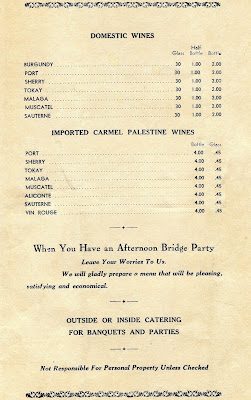 The restaurant/delicatessen was renamed Fine & Schapiro in the 1950s when it seemingly became independent. As it happens, Fine & Schapiro recently closed after 93 years of operation. It was reported to be the oldest kosher restaurant in New York. Jewish delicatessens, once a key link in the city’s food chain, have dwindled down to a few dozen.
In his book, Ben Katchor observes that “the quantity and quality of historical evidence depends upon the restaurant’s place in the economic ladder.” While it was more unusual for someone to save a memento from Isaac Gellis than from Gluckstern’s, menus from both establishments are relatively uncommon. It is largely through happenstance that such transient documents survive to aid what lingers in memory.
Notes
1. The Jewish dairy restaurants generally complied with kashrut and offered a range of specific dairy and vegetarian dishes from Eastern Europe, as well as fish which is not considered a meat under the dietary laws.
2. By 1901, New York City had “one hundred and fifty restaurants, two hundred wine-cellars with lunch rooms attached, and about thirty coffee-houses (operated) by Rumanian [sic] Jews.” These establishments were “frequented by all classes of Jews and lately by not a few non-Jews.” American Jewish Year Book Vol. 3 (1901-1902).
3. The name “Gluckstern’s Roumanian Restaurant” appears on the cover of a similar menu dated August 11, 1943 in the New York Public Library (NYPL).
4. Schwartz, Arthur. New York City Food. New York: Steward, Tabori & Chang, 2004.
5. Louis Gluckstern and his son Philip were sued by Simon Gluckstern for opening “The Original Gluckstern’s” directly across the street from what was the original restaurant. Louis and Philip Gluckstern eventually opened two kosher restaurants in the midtown theater district, Gluckstern’s at 157 West 49th Street and Phil Gluckstern's at 209 West 48th Street.
6. The menu in the NYPL shows the price of this dinner in 1943 was $1.50. In 1948, the same meal cost $2.00, reflecting a 133% increase over five years due to wartime inflation.
7. Isaac Gellis was one of the founders of the Eldridge Street Synagogue and a trustee at many Jewish institutions. Fourteen thousand people reportedly attended his funeral in 1906. The company continued under family management after his death.
8. Another kosher restaurant and delicatessen named Isaac Gellis was located at 2282 Broadway, just north of West 82nd Street. An undated menu shows this location was managed by Samberg and Spiegel.
9. A 1938 menu from Steinberg’s Dairy Restaurant at 2270 Broadway on the Upper West Side will be included in a public exhibition titled “A Century of Dining Out: The American Story in Menus, 1841-1941” at the Grolier Club in New York, opening in May 2023.
Posted by Henry Voigt at 11:04 AM

Glad I lived early enough to enjoy some of that food and the people in the restaurants.

So interesting. So many things you wouldn't find on menus today. I'm imagining these restaurants seemed homey and comforting to their regulars.