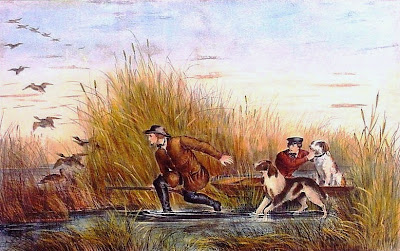 Two menus from Christmas Day in 1890 reflect regional differences in cuisine at a time when local styles of cooking were not always evident. Despite being held on opposite ends of the country, the dinners also featured some of the same dishes, such as Diamondback terrapin and Canvasback duck. Described as “the great American delicacies” by British novelist Frederick Marryat in his 1839 Diary in America, these lavish game dishes were served in traditional ways that transcended regional variations and foreign influences. 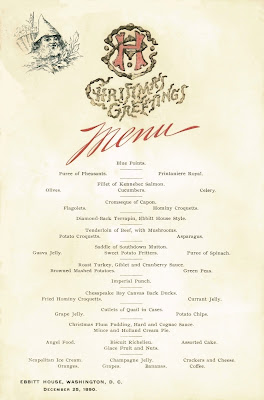 The above menu, featuring an elf-like Santa Claus, comes from the upper-class Ebbitt House in Washington, D.C. Although Canvasback ducks were hunted in other parts of the country, the ones on this menu probably came from the Susquehanna Flats near Havre de Grace, Maryland. This shallow, 25,000-acre water area was abundant with the wild celery that gave this species its distinctive flavor. Diamondback terrapins, which inhabited neither freshwater nor the sea, were also found in the Chesapeake Bay and its tributaries. For this dinner, the brackish-water turtles were prepared in the “Ebbitt House style,” probably a slight variation of the Maryland style in which pieces of the meat were cooked in a saucepan with Madeira wine, cayenne pepper, and butter. The dish was finished with cream mixed with boiled egg yolks and then poured into a heated tureen and served hot.1


Chef Jorge Lysles, dubbed the “Ebbitt House genius,” believed that the “three great essentials of good cooking” were that the dishes be wholesome, palatable, and attractive. Given his philosophy, it is surprising how much of the food on this menu is deep-fried, reflecting a Southern style of cooking that was prevalent in the nation’s capital. Cromesequis de capon are small croquettes in which the diced ingredients are bound with a sauce, wrapped in pig’s caul, dipped in batter, and fried. This dish was accompanied by hominy croquettes, which were also served with the Canvasback duck in what seems to be a more appropriate pairing. Other deep-fried foods included potato croquettes, sweet potato fritters, and potato chips, which until recently had been called “Saratoga chips.”


Chef Lysles contributed recipes to the newspapers that printed them alongside those from other culinary notables such as Chef Charles Ranhofer of Delmonico’s, and Herman Berghaus, the chef at Young’s Hotel in Boston. However, Lysles was prone to give his dishes political names, none of which appear on this menu. One of his favorite descriptors was “à la Reform,” referring to the movement against waste, inefficiency, and corruption during the Gilded Age. Examples include cottlett’s de monon à la Reform and his Christmas cake à la Reform.2 He also created Christmas cake à la Blaine in honor of James Blaine, the former Republican Senator from Maine who lost the presidential race to Grover Cleveland in 1884.3

Although the California Viticultural Restaurant and Café in San Francisco was founded by members of the city’s vibrant French community, this elegant establishment exclusively served California wines since it was affiliated with the State Viticultural Commission, an association that aided the local wine industry. In keeping with this theme, its Christmas menu in 1890 was decorated with a gilded cluster of grapes and a hot-air balloon advertising Eclipse Extra Dry Champagne, a domestic champagne produced by Agoston Haraszthy & Co., named after the Hungarian-born vintner who founded the Buena Vista Winery in Sonoma Valley in 1857. 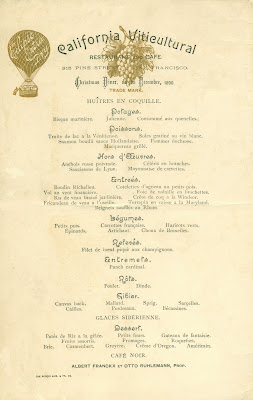 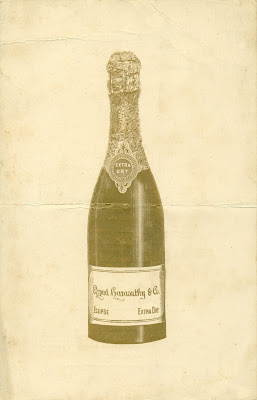 In addition to its regular à la carte menu, the California Viticultural Restaurant offered a six-course lunch for fifty cents and an eight-course dinner for seventy-five cents. However, the price of this special holiday dinner is not shown. The lavish feast featured oysters, soups, fishes, hors d’oeuvres, entrees, and seven species of roast duck. The good selection of vegetables included artichokes from Napa Valley. While the Canvasback ducks may have been sourced locally, the terrapin was shipped from Eastern Shore of Maryland via the transcontinental railroad. Although the terrapin was prepared en caisse in a fanciful piece of paper, it was essentially the same dish served 2,800 miles away at the Ebbitt House, an American delicacy that symbolized the national cuisine.

Epilogue
Backed by prominent vineyards, restaurateur Albert Franckx opened a California Viticultural Restaurant in Chicago in 1891, while his partner Otto Ruhlemann stayed behind in San Francisco to manage their first location.4  The restaurant in Chicago was located near the leading hotels on Wabash Avenue, well positioned to promote California wines during the upcoming World’s Columbian Exposition. Franckx envisioned that his cuisine would challenge that of Kinsley’s and the Richelieu Hotel, then considered the finest places to dine in the Windy City. Unfortunately, the dinner on opening day was a fiasco. The Chicagoans complained that they could not understand the French waiters, and even worse, they “roundly and unanimously condemned” all of the California wines.5 The new branch appears to have been short-lived.

Funny, when I saw reform, I thought of the great club in London... where the great Alexis Soyer once cooked... but that would be a little hard to figure since Soyer would have been 40 years dead and long forgotten by that time. Still, one of the most frustrating things are those one-off dishes with names that you can't associate with a recipe... that might even have been popular for a season but now, who knows?