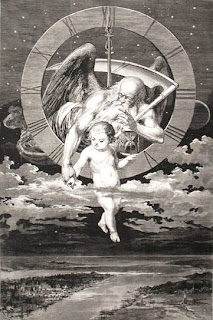 The major happenings of 1885 involved large things—the Statue of Liberty arrived from France; the Washington Monument was finally completed; and the ten-story Home Insurance Building was erected in Chicago, becoming the first "skyscraper" made with structural steel. Newspapers also reported that Jumbo the Elephant was killed by a locomotive while crossing the railroad tracks, three years after showman P. T. Barnum brought the beloved circus animal to the United States amidst great fanfare. Four menus from the first day of that eventful year reveal how the holiday was once celebrated.

Mason City, Iowa
In the nineteenth century, the president hosted an afternoon reception on New Year’s Day at the White House where he received ambassadors, congressmen, and other distinguished guests. Social gatherings were also held in small towns, as illustrated by the menu below from Mason City, Iowa which then had a population of about 3,000 people. The stylish menu is printed on cardstock engraved by Baldwin & Gleason in New York City.1 The women who hosted this party went by nicknames, such as Lizzie, Bessie, Hattie, and Gertie. Minnie, the diminutive for Mary and a surname in its own right, was at the height of popularity, ranking fifth among all women’s names in the United States.2 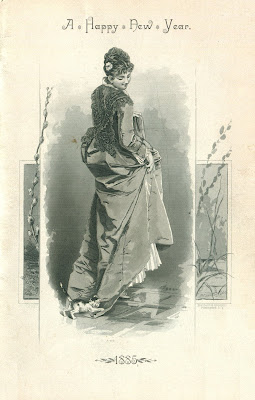 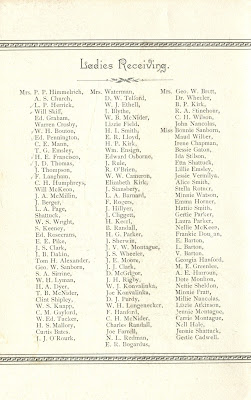 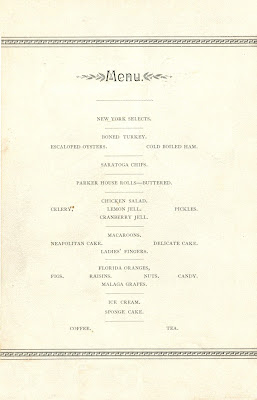 The music program appears on back page. No place conjures up images of the American heartland quite like Mason City. It was made famous by the 1957 Broadway musical The Music Man which portrayed many of the town's colorful characters at the turn of the last century. 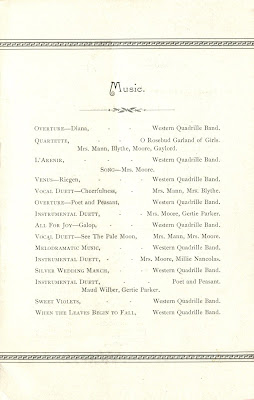 Lakewood, New Jersey
The luxurious Laurel House was situated only sixty-five miles south of New York City. This winter-spring resort hotel offered the type of outdoor activities normally associated with the summer season. In fact, the relatively mild climate of the pine barrens of New Jersey was so appealing that some of the wealthy guests later built estates in the area.

The refined cuisine at the Laurel House reflected its clientele, many of whom were listed on the social register. The resort also attracted distinguished guests, such as Mark Twain, architect Stanford White, restaurateur Samuel S. Childs, and jurist Oliver Wendell Holmes. 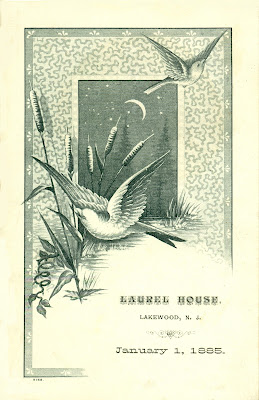 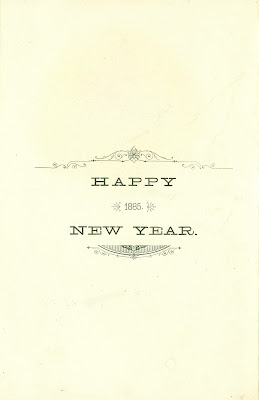 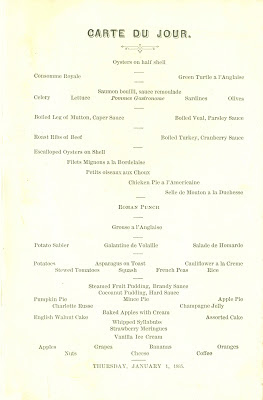 Clifton Springs, New York
The Sanitarium at Clifton Springs served a surprisingly lavish dinner on the first day of 1885.  This medical facility practiced alternative forms of medicine, including hydrotherapy to promote healing and homeopathy that employed minute doses of a remedy that would produce symptoms similar to those of the disease if administered in larger amounts.


Many of the rich dishes and pastries on this menu were regularly served at restaurants and hotels. The ham is prepared in the “Parker House style.” The menu also offers bland foods, such as mashed potatoes, boiled rice, and oat meal, that were always available at sanitariums. 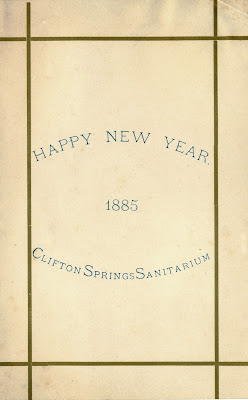 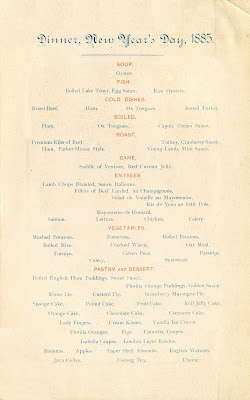 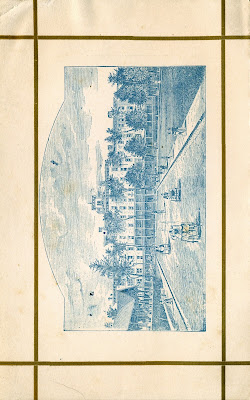 Emporia, Kansas
One hundred and thirty couples attended first annual ball and banquet of the Central Kansas Live Stock Association at the Coolidge Hotel in Emporia. Situated on upland prairie, this town of about 6,000 was well situated at the junction of the Atchison, Topeka & Santa Fe and the Missouri-Kansas-Texas railroads. In addition to transporting their crops and grass-fattened cattle to markets on the East and West coasts, the railroads brought in fresh oysters and fish. 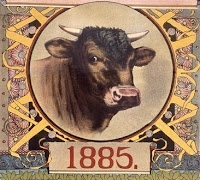 The extraordinary menu below features many types of game, such as buffalo, elk, antelope, and black-tailed deer. Three species of bear are prepared in different ways—fillet of Grizzly bear, ribs of Black bear, and loin of Cinnamon bear a la Apache. Other game dishes include wild turkey, Canvasback duck, and English hare, Jayhawk style. (In Kansas, English hare were commonly known as jackrabbits which appear by that name in another dish.) 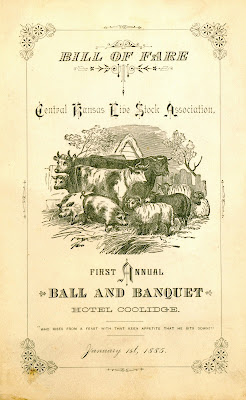 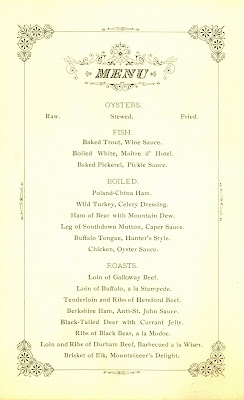 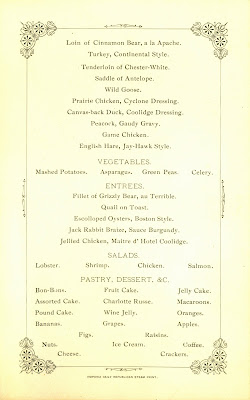 One of the most interesting aspects of this bill of fare are the domestic breeds of cattle and swine that were procured from all seven counties of the Central Kansas Live Stock Association. Although Galloway, Hereford, and Durham cattle were developed in the United Kingdom, two of the three breeds of swine originated in the United States. Chester White hogs first appeared in Chester County, Pennsylvania sometime around 1818. At about the same time, the Shaker community in Ohio bred the Poland China which are excellent feeders and gain weight quickly. They now rank high in U.S. pork production.3 The heavily-marbled Berkshire hogs would later become a rare breed but have recently made a comeback. Although the valleys of central Kansas were dotted with many well-tilled farms, only a few vegetables appear on the menu.4

The eighteen after-dinner toasts began by honoring Kansas, the country, and the cattle interests of the state. These tributes were followed by toasts to the domestic markets, the foreign markets, shorthorn cattle, Galloway cattle, Jersey cattle, feeding and grazing cattle, cattle on the Rio Grande, longhorns, the American hog, livestock transportation, the wool interests of Kansas, the cornfields of Kansas, Buffalo grass, and the middle man. The last toast was to “the ladies” and once that sentiment was properly expressed, the dancing could begin. The Wichita Daily Eagle reported that men “whose feet had been strangers to the dance floor for many a year, tripped the light fantastic” until the late hours of the night.

Epilogue
There was also big news in Emporia in 1885. James Walkup, a forty-eight-year-old businessman and acting mayor, traveled to New Orleans to visit the brothels. He became infatuated fifteen-year-old Minnie Wallace, the daughter of the woman who ran the boarding house where he was staying. The teenager played the piano and sang in the city’s red-light district. Although Minnie spurned his initial advances, she eventually agreed to marry him. A month after the newlyweds returned to Emporia, Walkup fell ill and died. When Minnie was charged with murder, reporters came from all over the country to cover the trial.5

The local community was divided as to whether Minnie poisoned Walkup, even though the autopsy revealed that he died of arsenic, a compound she purchased on two occasions from a nearby druggist. And while arsenic was then used to treat certain skin conditions, Minnie did not have any such problems with her complexion and had never used it before. Nevertheless, the jury rendered a verdict of “not guilty.” By some accounts, the jurors were haunted at the prospect of sending the young woman to the gallows.

Minnie left town after receiving the money from her late husband’s life insurance policy. While living in Chicago in 1897, she met a wealthy man who was dying of alcoholism. She kept him as a virtual prisoner in her house until she could arrange to marry him. He died twelve days after signing a will leaving everything to her. In 1900, Minnie began a relationship with a married man twenty years her senior. After his wife died, he added Minnie to his will and shortly thereafter succumbed to cyanide poisoning. Minnie died in 1957 at the age of 88 in San Diego, California.6
Notes
1. Card stock of this type was often used for hotel menus. It is unusual to find a printed menu from a private social affair, suggesting that formal menus were not often printed for these occasions.
2. Minnie has not ranked in the top thousand surnames for American women since 1970.
3. These swine may have been Big China hogs, a breed that was popular in Maryland, Pennsylvania, and Virginia in the eighteenth and early nineteenth century.
4. One topic of conversation at this dinner would have been the recent death of John Simpson Chisum, the Texas rancher who owned over 100,000 head of cattle, the largest herd in the country.
4. Virginia A. McConnell, The Adventuress: Murder, Blackmail, and Confidence Games in the Gilded Age, Kent State University Press, 2010.
5. murderbygasslight.blogspot.com
Posted by Henry Voigt at 8:52 AM

What a great look into our history. Well done!

Wow, a real black widow and a long lived one!@ She had the face of an angel! I see why she got away with it. Have a happy new year!!

I enjoyed this post! It took quite a turn. Reading much right now about New Orleans culture and food history. . . . I liked the tie-in to New Orleans, as unexpected as it was. Keep up the great work on this blog!