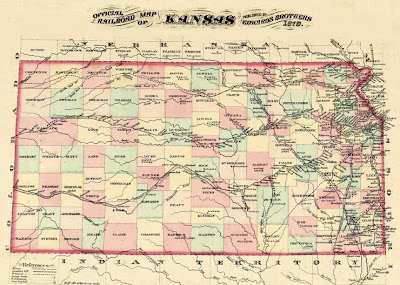 Ephemera often contains unwitting historical evidence. A case in point is provided by a small menu from the Copeland Hotel in Topeka, Kansas in 1883, the same year Emma Lazarus captured the welcoming spirit of America in her famous poem that included the  line: “Give me your tired, your poor / Your huddled masses yearning to breathe free...” Although a dish on the menu alludes to this ideal, the railroad timetable on the back reveals the harsh realities of a time when masses of dispossessed people were migrating throughout the United States. 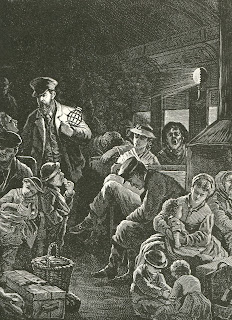 Topeka was centrally situated on two major railroad lines—the Union Pacific and the Atchison, Topeka, and Santa Fe. Only a few years earlier, restaurateur Fred Harvey opened his first eatery above the ATSF depot. The timetable below shows that regular passengers were given twenty minutes to bolt down their meal and get back on the train. The railroad schedule also includes the nonstop “emigrant trains” that carried new immigrants to the West. While the number of people coming from Germany and the Nordic countries had already peaked by the early 1880s, a new wave of immigrants was arriving from eastern and southern Europe. 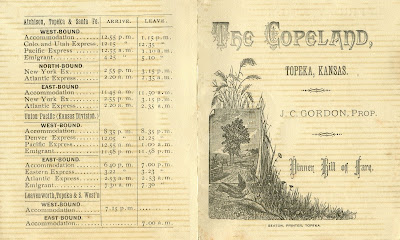 The emigrant trains comprised old, worn-out passenger cars, or  freight cars temporarily fitted with short wooden benches along the wall. At night, men, women, and children slept on boards laid across benches. (On the return trip, the benches were removed so the compartments could be filled with grain.) The trains were rolling slums; the stagnant air reeked of stale food and tobacco. For the most part, the emigrants were rudely treated by railroad functionaries who showed little interest in calming their anxieties. The miserable journey often ended at a remote siding where they were summarily dropped off in a state of confusion and despair. After novelist Robert Louis Stevenson rode on one of these trains in 1879, he wrote, “Civility is the main comfort you miss. Equality, though very largely conceived in America, does not extend so low as the emigrant.”


Some items on the bill of fare were transported by the national railroad network that had been rapidly expanding since the Civil War. Perishable foods, such as New York dairy cheese, were now routinely shipped across the country in freight cars refrigerated with ice. The Boston steam brown bread and Boston browned potatoes reflect the nostalgic food traditions of an increasingly-transient society. 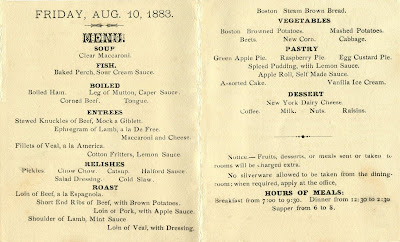 Two of the entrées have patriotic names—fillet of veal, à la America and epigram of lamb, à la De Free. The culinary epigram was an eighteenth-century invention that combined small pieces of one kind of meat (usually lamb) that were cooked in two different ways, breaded and fried and broiled. In addition to the immigrants, the descriptor “à la De Free” brings to mind the native-born citizens called Exodusters who were also passing through Topeka, yearning to breathe free. When Reconstruction abruptly ended in the South in 1879, large numbers of former slaves began to migrate from states along the Mississippi in order to escape racial violence. In Kansas, they received land grants and found better working conditions.

I never much thought about steerage in westbound US trains. I usually think of the poor travelers in wagons, not trains. The menus don't look so bad, I wonder what the quality was like? I must say, the idea of the lamb cutlet bits in crispy crust sounds delish, like lamb fingers!

Henry, love this post. I think most emigrant travelers usually brought their own food. Or bought it from peddlers who would come to windows when the trains were stopped.
What on earth are cotton fritters?