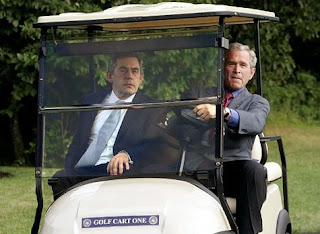 President George W. Bush was anxious to form a good relationship with the newly-chosen British Prime Minister Gordon Brown when he came to United States in July 2007. Brown’s predecessor, Tony Blair, whom one of the backbenchers in Parliament unkindly characterized as “George Bush’s poodle,” had been a good friend and ally and would be sorely missed. Looking back at what previous administrations did in similar situations, the president decided to host a casual cookout.

Camp David, the presidential retreat in Maryland’s Catoctin Mountains, was selected as the best place for extending this type of down-home hospitality. The luncheon featured regular fare like cheeseburgers, French fries, onion rings, and banana pudding, as shown on the comically-formal menu below. 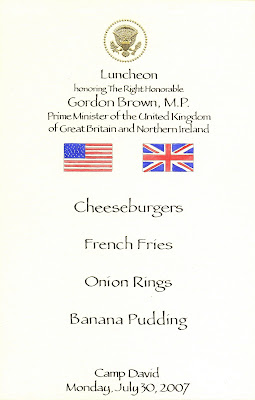 The luncheon for Prime Minister Brown was reminiscent of the picnic held by President Franklin Roosevelt in 1939, when served hot dogs to King George IV and Queen Elizabeth of England. This informal picnic at the president's estate in Hyde Park, New York was also designed to make friends. More importantly, it was orchestrated to present a friendly image of the royal couple to the American people on the brink of war. As indicated by the penciled change on the planning menu shown below in the FDR Presidential Library, it appears that the president wanted to serve hot dogs at this aristocratic picnic whether it rained or shined. As with most politicians, Roosevelt instinctively understood that food is a powerful symbol. Indeed, his keen political instincts were confirmed the next day by the New York Times headline that declared: “King Tries Hot Dog and Asks for More.” 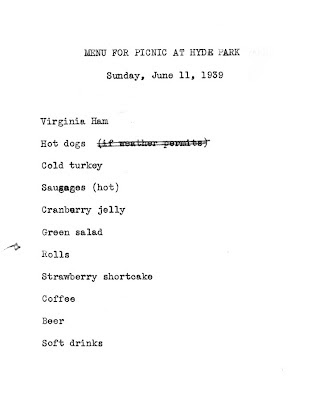 President Roosevelt’s hot-dog stratagem proved to be more successful than President Bush’s cheeseburger diplomacy. Perhaps Bush really cooked the cheeseburgers “well done” as he jokingly promised. Unfortunately, things did not turn out much better the following month when French president Nicolas Sarkozy visited the Bush summer home at Kennebunkport, Maine. For this cookout, the president served both hamburgers and hot dogs, but to no avail. The problem this time was Cécilia Sarkozy who failed to show up for the luncheon. Although the first lady of France had recently been seen shopping, the official reason for her absence was a sore throat. However, as she herself explained on another occasion, “I don’t see myself as first lady—the whole idea bores me.”

In the end, the cheeseburger strategy was misguided. Hamburgers and hot dogs may be an effective way of communicating values to the American people, but these plebeian foods are likely to have the opposite effect when trying to make friends with haughty European politicians.
Posted by Henry Voigt at 11:59 AM