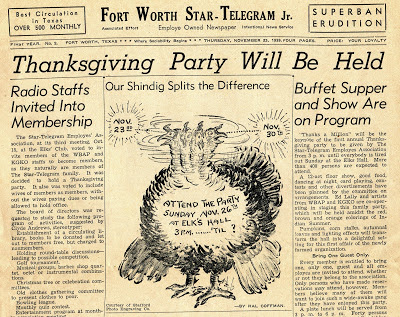 In 1939, President Franklin Roosevelt declared that Thanksgiving would be held on the third Thursday of November, instead of the fourth, in order to extend the Christmas shopping season. The polls showed that sixty percent of Americans were opposed to idea since company holidays, school vacations, and college football games were already scheduled. Since the presidential declaration was not legally binding, twenty-three states refused to change the date. Colorado and Texas decided to officially celebrate on both days. A store owner in Kokomo, Indiana hung a sign in his window that read: “Do your shopping now. Who knows, tomorrow may be Christmas.” Menus from the period show that the conflict continued until 1941.

Abraham Lincoln declared that the first Thanksgiving be held on the third Thursday of November in 1863. His successor, Andrew Johnson, changed it to December, but President Ulysses S. Grant later moved it back to the original date where it stayed for the next seventy years. However, in 1939, the autumnal holiday fell on the last day of the month, prompting the National Retail Dry Goods Association to request that Thanksgiving be changed to the third Thursday, arguing that sales would be higher if the shopping season was extended by seven days.1 (At the time, it was considered inappropriate to advertise Christmas goods before Thanksgiving.) The recovery from the Great Depression was still tenuous, especially after economy took a second dip in 1937 when Congress tried to balance the budget before the nation was sufficiently back on its feet. Roosevelt agreed to their proposal.
The Civilian Conservation Corps, a public work relief program for unemployed young men, celebrated in accordance with the President’s wishes. This menu comes from Camp Snowline, situated midway between Sacramento and Lake Tahoe, near the Eldorado National Forest in California. 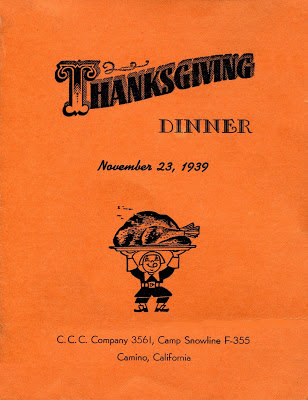 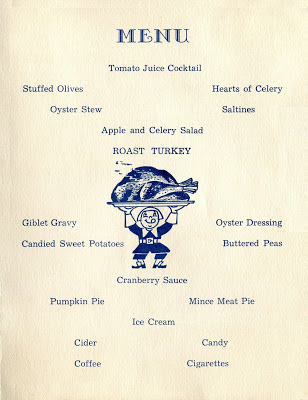 World War II started in September of that year when Nazi Germany invaded Poland. By Thanksgiving, Lockheed’s reassembly plant in Liverpool had delivered 250 Hudson bombers to the RAF.2 Lockheed created the Hudson by adding a bomb bay and three machine guns to the Super Electra, making it one of the first aircraft of U.S. design to be used in war. The company observed the American holiday in England on the official date. 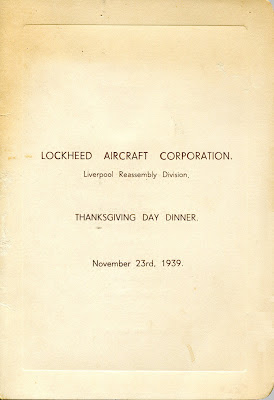 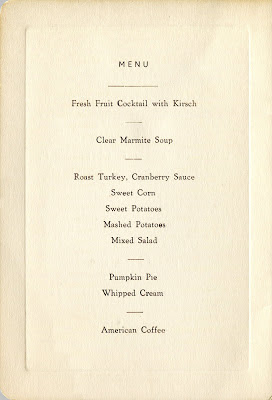 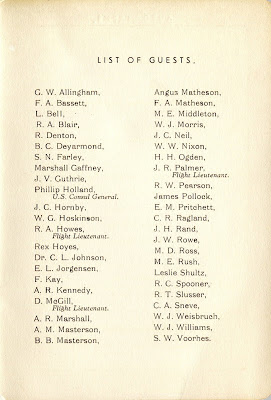 Republicans denounced the change in date, calling it another New Deal scheme and an affront to the memory of Lincoln. Legal battles even erupted as to who had the right to declare the Thanksgiving holiday. The mayor of Atlantic City dubbed the holiday “Franksgiving.”  The attorney general in Oregon articulated the opposition in verse:

Thirty days hath September,
April, June, and November;
All the rest have thirty-one.
Until we hear from Washington.

The menu below from Drake-Wiltshire Hotel in San Francisco shows that Thanksgiving was celebrated on the third Thursday in California in 1939. 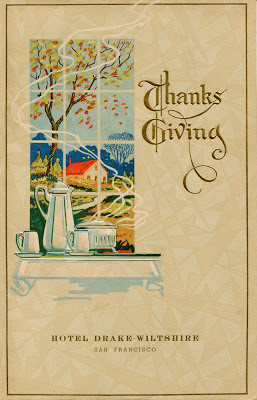 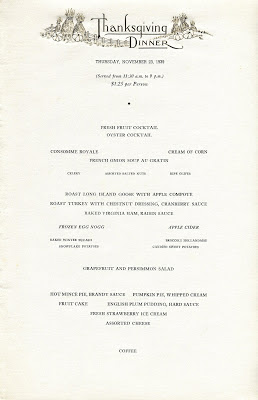 Some establishments regarded the confusing situation as an opportunity, such as the Palmer House in Chicago which hosted two Thanksgiving dinners. The notice on the menu below reads: “In deference to our many out-of-town guests whose home states did not observe Thanksgiving on November 23rd, the Palmer House presents its Thanksgiving menu again today, Thursday, Nov. 30th.” 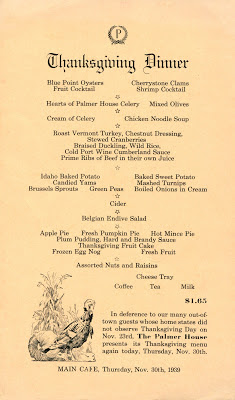 The special dinner at the Palmer House is $1.65, or about a third higher than the one served at the Drake-Wilshire Hotel. By contrast, the set dinner in the Empire Room of the Waldorf-Astoria Hotel is $4.00. 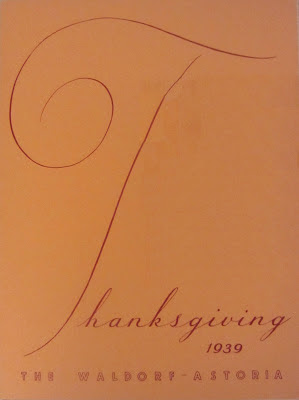 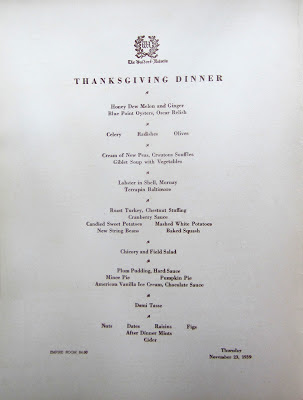 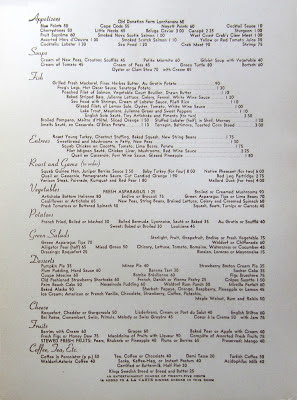 1940
In 1940, FDR again set the date as the third Thursday of November. Although thirty-two states went along with the president’s proclamation, the issue seemed no less contentious because it was an election year. 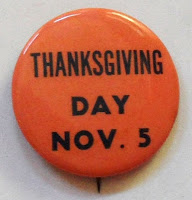 Wendell Willkie, a Wall Street industrialist running on the Republican ticket, used the controversy as one of his campaign themes, declaring there would be "a day of thanksgiving"  if the voters elected him, instead of giving Roosevelt a third term in office. 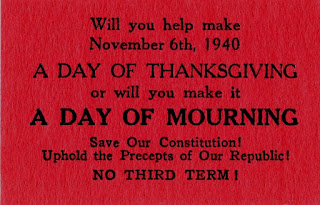 The menu below from the Rathskeller in Cincinnati’s Gibson Hotel is dated November 21, indicating that Ohio was among the thirty-two states that went along with the president in 1940. 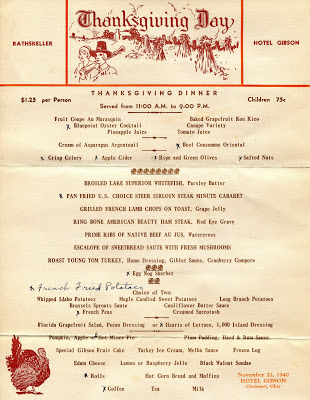 Howard Johnson’s served its special dinner on November 28, reflecting the fact that most of its restaurants were in New England, where the states were unwilling to change the long-standing custom.3 By now, the traditional date was dubbed the “Republican Thanksgiving.” Interestingly, the dinner at Howard Johnson’s was ten cents higher than the more lavish one at the Gibson Hotel. 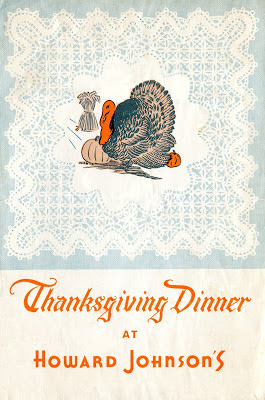 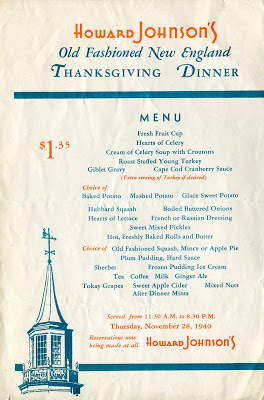 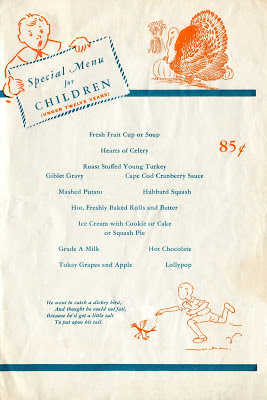 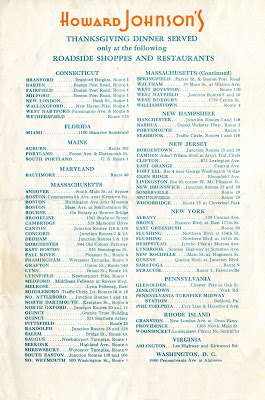 1941
This menu, dated November 20, 1941, comes from the Golden Pheasant in San Francisco. The cover is decorated with a stalk of wheat that lost all of its kernels over the course of the last seventy-one years. 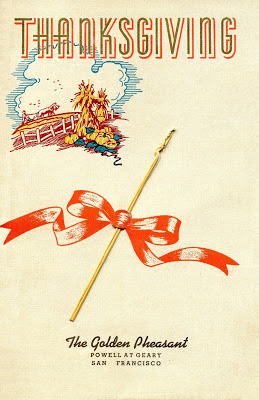 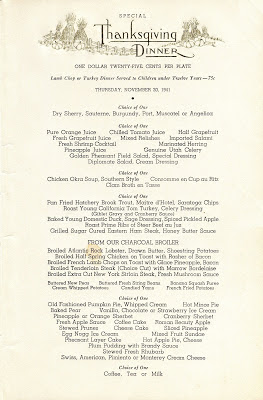 United Airlines handed its passengers a holiday menu during flights on both November 20 and 27. 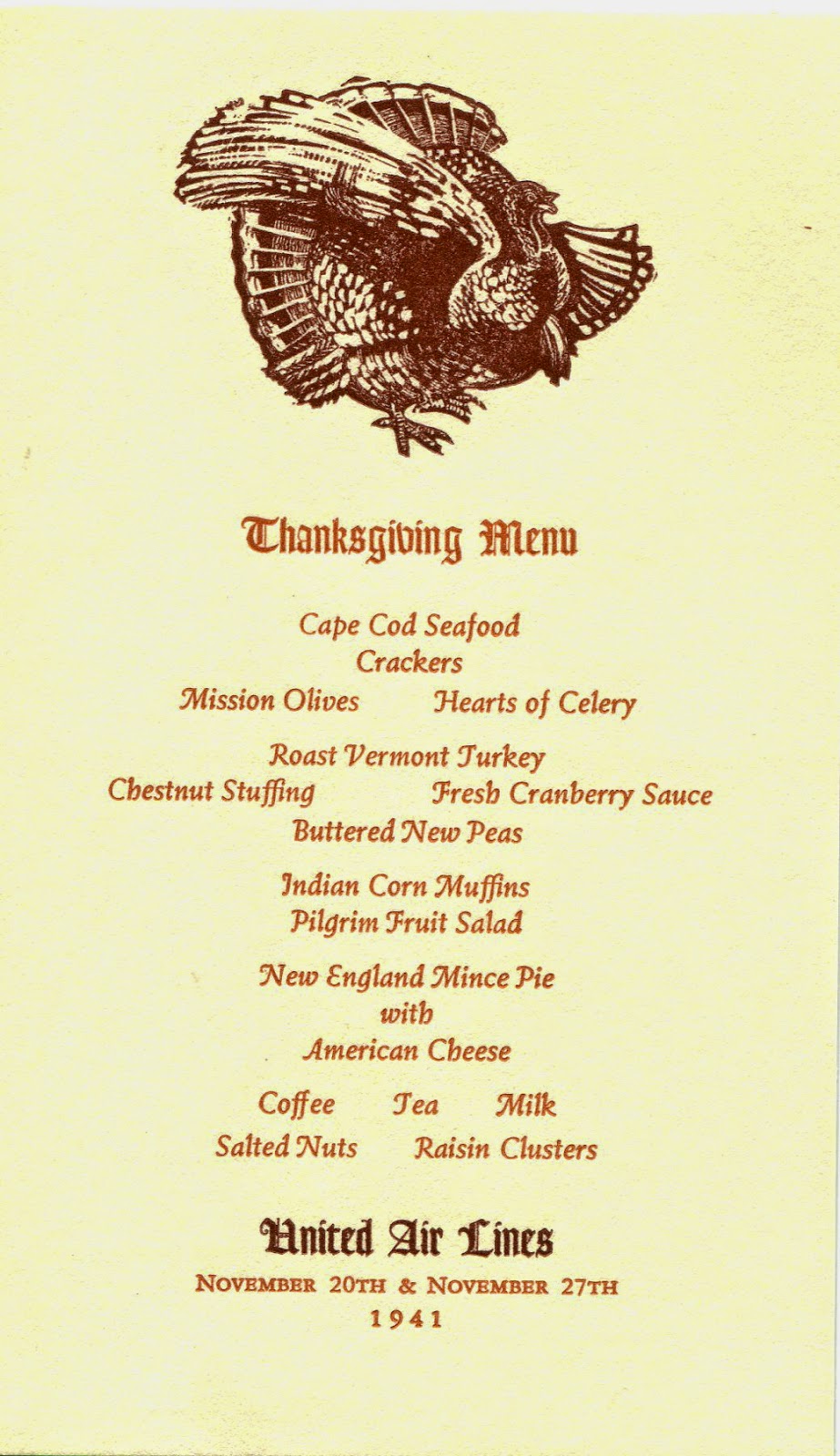 The U.S. Submarine Base in the Territory of Hawaii avoided politics by simply dating its menu “Thanksgiving 1941.”  By now, the issue had become a moot point after Roosevelt announced that the national holiday would go back to the traditional date in 1942. In order to ensure that it would not be changed again, Congress passed a bill establishing the fourth Thursday in November as a legal holiday. The Japanese attacked Pearl Harbor in December. 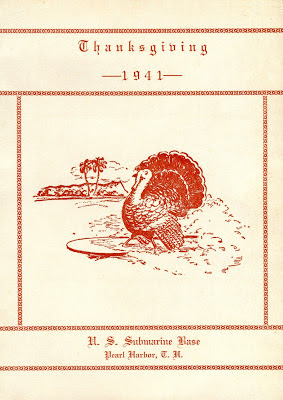 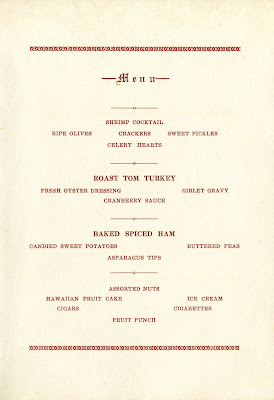 As it happened, the extended shopping season did not boost Christmas sales. Although the level of spending stayed about the same, the pattern changed. In states that celebrated in the third week of November, retail spending was evenly distributed throughout the season. In those states that celebrated on the traditional fourth Thursday, most shoppers waited until the week before Christmas.

Notes
1. Fred Lazarus, Jr., founder of the Federated Department Stores (later Macy’s), is credited with convincing Roosevelt to push Thanksgiving back a week to expand the shopping season.
2. The Hudson bomber was nicknamed the “Old Boomerang” for its ability to withstand enemy fire and safely return home. The manufacturing facilities and support bases in Liverpool and Ireland, would assemble, modify, and repair about 22,500 aircraft of all types during the war.
3. In addition to those in New England, the other states that adhered to the last Thursday in November in 1940 were Pennsylvania, Tennessee, North Carolina, Florida, Arkansas, Oklahoma, Kansas, Iowa, South Dakota, and Nevada.
Posted by Henry Voigt at 6:25 PM