A Circle of Friends


The American custom of having afternoon tea is often traced back to the Waldorf-Astoria Hotel, shortly after it opened in 1898. However, well before New York high society engaged in their version of the British ritual, members of the middle class were using the term “five o’clock tea” to describe some of their get-togethers. This is illustrated by nine enigmatic menus from the mid-1880s that recently came to light—a surprising discovery, since menus were seldom printed for such events in private homes. The only information about them was that they all came from the same source, apparently saved by a woman who belonged to a small social group; one of the menus was from a dinner dance that included a broader circle of friends. Although the menus included the names of the participants, the use of nicknames and initials made it difficult to determine where the menus originated. Still, through trial and error, I was able to identify the location as Flint, Michigan, then a small town of about 9,000 people. In addition to providing a glimpse of the social practices in the nation’s heartland, one of the menus also reveals the inherent optimism of the rising middle class whose confident spirit would soon set the country’s wheels into motion.


These late-afternoon meals are called by variety of names—lunch, coffee, tea, and supper.  The earliest bill of fare comes from a “New England Supper” on October 31, 1882. The occasion is also identified as Halloween. This represents an unusual juxtaposition of themes, for the Puritans of New England had been opposed to merrily celebrating the day on the liturgical calendar known as All-Hallows’ Eve. Although attitudes in the United States changed with the influx of Irish and Scottish immigrants who approached this annual holiday with a joyful spirit, it would take until the first decade of the twentieth century before Halloween was fully assimilated into mainstream society. 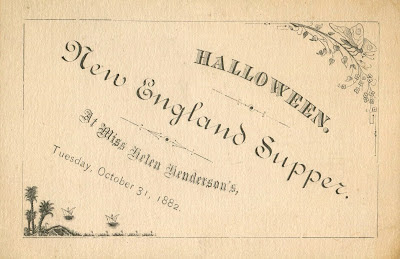 The dishes include pork and beans, brown bread, and pumpkin pie. Associated with the colonial period, these traditional foods were featured at theme suppers across the country during the Centennial Celebration in 1876. 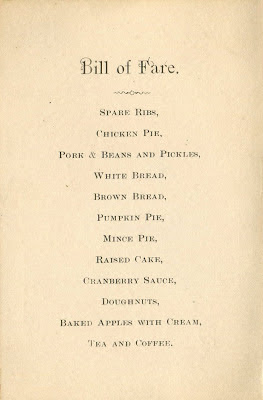 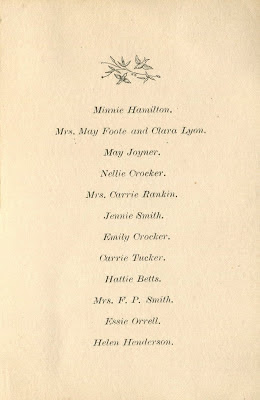 Everyone usually brought a dish to these gatherings. In the spring of 1885, the potluck supper at May Joyner’s house was called a “five o’clock tea” even though it included foods like fried chicken and home-made potato chips, here called “Saratoga chips.” The lettuce salad is dressed with Durkee’s, a commercial product made in Queens, New York. This menu is faintly inscribed with the name of Carrie Rankin. Her name appears on all of them in one form or another, indicating that she was probably the person who saved this group of menus. Then twenty-nine years old, she brought the baking powder biscuits shown below. 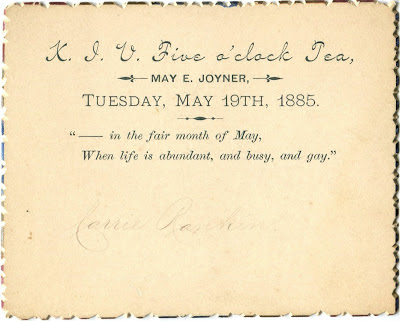 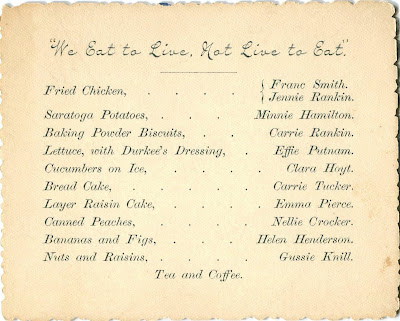 The late-afternoon meal at Mrs. Flint Smith’s house in October 1885 is dubbed a “four o’clock lunch.” These menus are printed in the so-called artistic style, featuring the kind of fancy type designs and quirky embellishments then in vogue. Carrie’s husband, Francis H. Rankin, Jr., was a letterpress printer (and publisher of the Wolverine Citizen) who probably made these menus for his wife and her friends. 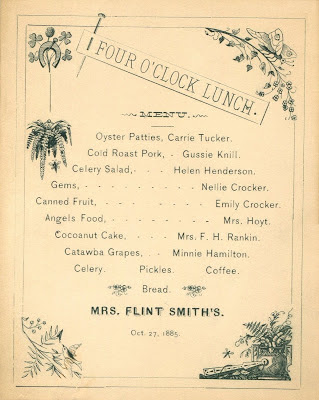 Several menus are marked with the Roman numeral “XIV,” suggesting this social clique comprised fourteen women. The “five o’clock tea” in November at Miss Minnie Hamilton’s home includes cold tongue, oyster sandwiches, and Parker House rolls, named after the famous hotel in Boston. The menu below is printed on card stock engraved by J. A. Lowell in Boston. 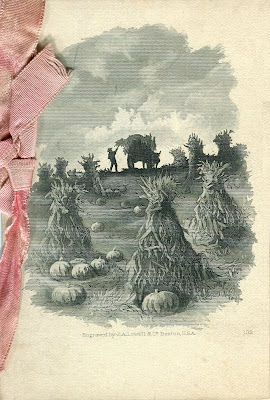 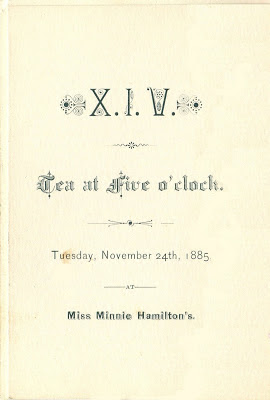 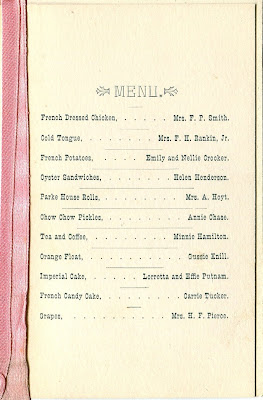 Strawberries were in season in May 1886, when Annie Chase hosted this “afternoon coffee.” Many of these meals include a lettuce salad, a seasonal dish not often served at hotels and restaurants—the word “salad” on commercial menus often referred to cooked salads. Highly-perishable lettuce varieties were then only available in local markets during the spring and fall. 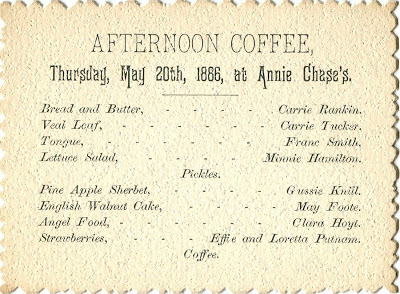 Loretta Putnam hosted the group in July of possibly the same year. To escape the heat of the day, this so-called “tea” began at 7:30 in the evening. Featuring cold dishes appropriate for the summertime, this supper may have been served al fresco, either on the porch or in the yard. 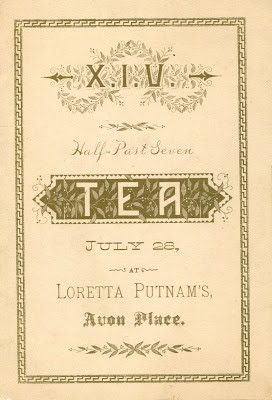 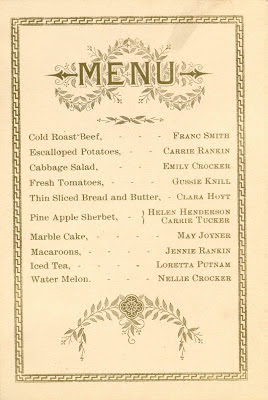 In September 1886, twelve members of the “XIV” ate at the local Bryant Hotel, an unusual venue for a potluck lunch where everyone brought a homemade dish. 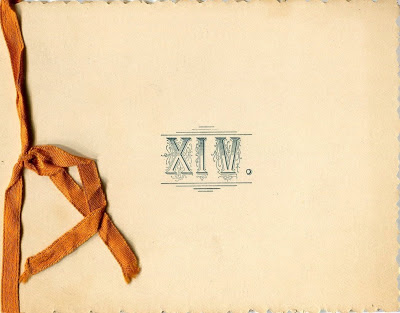 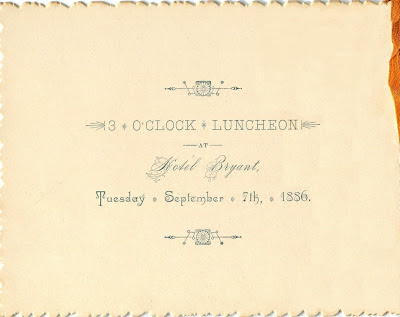 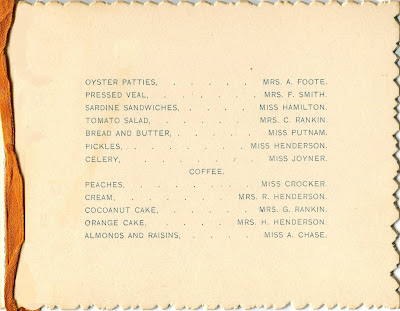 On April 27 of the following year, Carrie Rankin hosted this lunch at her home on First Avenue and Lyon Street in central Flint. As one might expect in a small town, this group of friends (some of whom were related) lived within a six-block radius of one another. 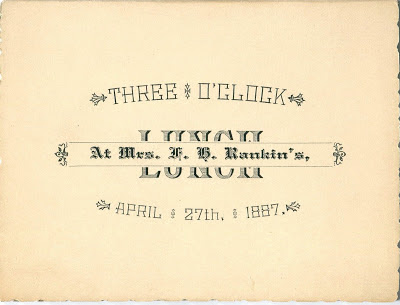 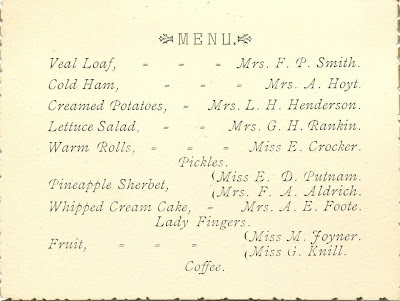 Representing a different type of affair, the menu below comes from the third annual party of the Why Not Club. This group seemingly comprised Francis Rankin and other men married to women belonging to the “XIV.” The event was held on Thursday evening, November 26, 1885. It was also Thanksgiving although there is no reference to the holiday. The festivities began with dancing, followed by a late supper at the Bryant Hotel. 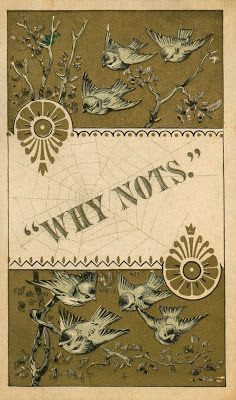 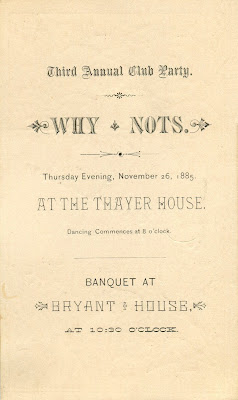 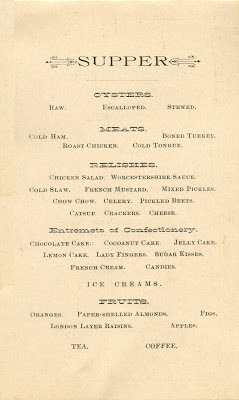 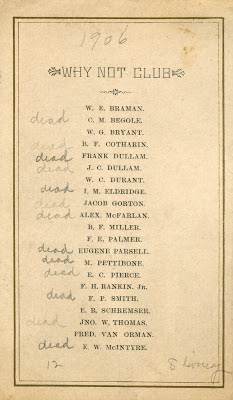 The somber notations on the back of this card are unusual. Twenty years later in 1906, someone (presumably Carrie Rankin) ran a grim tally to determine how many of the “Why Nots” had died. Thirteen men were marked “dead.” Interestingly, someone named W. C. Durant was one of the eight men shown to still be alive. This was probably William C. Durant, a leading pioneer of the automobile industry who embodied the optimistic spirit reflected by the name of the club.

In 1885, twenty-four-year-old “Billy” Durant co-founded the Coldwater Road Cart Company, making horse-drawn carriages. He went on to establish other companies, and by the early twentieth century, he was manufacturing cars. In 1908, he and Frederic L. Smith formed General Motors. After losing control of the company in 1910, Durant partnered with Swiss-born race car driver Louis Chevrolet. Working together, they founded Chevrolet which later acquired General Motors in 1915, thereby creating a system of multi-brand holding companies with different lines of cars. Although Durant and rival Henry Ford both foresaw the automobile as a mass-produced product, these entrepreneurs approached the market differently. Ford believed in making one basic model, famously saying “Any customer can have a car painted any color that he wants so long as it is black.” Durant, on the other hand, drew on his experience in the carriage business, producing automobiles for various incomes and tastes. Why not?

I'm a regular reader, and so, a fan. But I must question your initial assertion that there is an "American custom of having afternoon tea."

These had to be upper class (perhaps anglophile) women, who could leave their homes close to dinner time, with their children eating what their cooks served, and their husbands left to their (creative) own, possibly at an equally anglophile club downtown.

Thank you for your comment. It appears that these young, middle-class women employed the word “tea” to give their potluck lunches and suppers a touch of class—the same reason they had menus printed for these occasions. Interestingly, the term was used interchangeably with “lunch,” “coffee,” and “supper,” indicating that these get-togethers in a small Midwestern town bore little resemblance to the British tradition. However, you are correct in suggesting that during the late-nineteenth century, it was the American upper-classes who had the resources and desire to mimic English social customs, such as having afternoon tea.

I've done a lot of research on the era ca. 1900, and I think there's a misconception about class differences at the time. For instance, I really don't think these needed to be wealthy women, just securely middle-class, or petite bourgeoisie. What you'd expect of someone who runs a print shop. Would someone like that seriously be likely to belong to a "anglophile club downtown"? Seems pretty unlikely.

And servants were not a luxury restricted to the rich. They were generally paid $10-20/month. I've seen ads as low as $8/month.

I've often heard the argument put forward that no one but the wealthy had leisure time, yet every afternoon in New York dozens and dozens of vaudeville houses were running cheap matinees. I doubt you'd find the Astors attending.

I forgot to add, I really enjoy your posts!

Henry, great post! That collection was quite a find.

Regarding social class, I would say that tea parties definitely had "cachet" and reflected, if not membership in the town/city's business and professional class, certainly aspirations to attain that status. Also, WASP ethnicity.

As an Englishman I would just say that afternoon tea or teatime can mean different things to different people.

Afternoon tea can be a multi course event with sandwiches, scones with jam and cream, cakes and strawberries served with shortbread or cream. Traditionally as the song says 'When the clock strikes four, everything stops for tea' This would traditionally be a middle or upper class event.

For the working classes tea was the main evening meal as opposed to the middle and upper classes who would have dinner.

A tradition that has largely died out is High tea which was usually taken on Sunday mostly a working or lower middle class tradition. This was a more substantial meal with cold meats and salad, trifle or tinned fruits and cake.

It is said that the disappearance of servants after the Second World War did much to raise the standard of cooking in English homes, as the middle classes had to do it themselves inspired by writers such as Elizabeth David.

I enjoy your blog very much and the insight it gives to American life at different times in its history.

What an interesting post! This group of women (and their husbands) would make a great background for a novel!