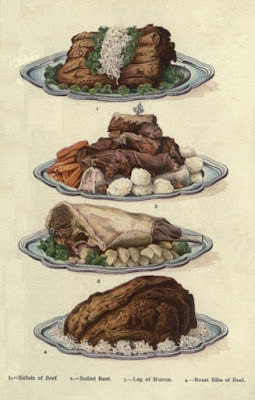 Menus, which are marketing tools as much as anything, are best taken with a grain of salt. It can be particularly difficult to identify exaggerated claims on old menus far removed in time and place. In the mid-nineteenth century, a large assortment of roasts and boiled meats regularly appeared on table d’hote menus at hotels, where most public dining rooms were then situated. It seems unlikely that all of these items were available on a daily basis, especially at modest hotels in small towns. Four menus provide insights on how we might interpret such documents from the antebellum period.

Although this menu from the American House in Des Moines, Iowa is dated 1858, it was probably never used since no specific day is indicated and the soup section is blank. It may have been an advertising handbill, showing a typical bill of fare. The numerous joints of meat and roast fowl convey a sense of abundance, one of the underlying themes of American food culture. 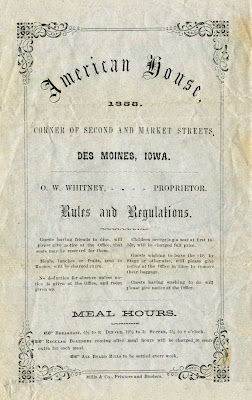 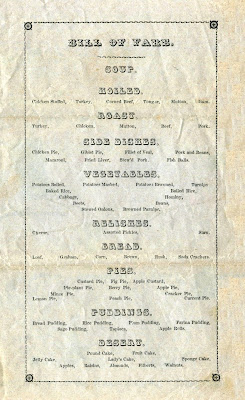 The menu below from the Adams House in Oshkosh, Wisconsin is dated for two days a month apart in 1857. Dinner is shown on the cover. Breakfast appears on the inside, along with a steamboat schedule. (Oshkosh is situated where the Fox River enters Lake Winnebago.) The daily bill of fare was created by crossing off the dishes that were not available from a pre-printed list of soups and meats. This format was never widely adopted, perhaps because it implied scarcity, not abundance. 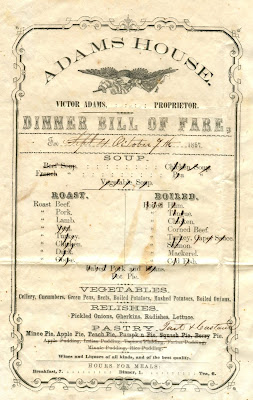 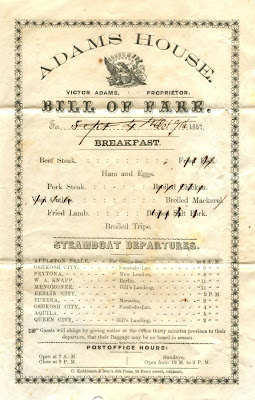 The Sagadahock House in Bath, Maine employed a distinctive typeface to call attention to its soup of the day. Two table d’hote menus from consecutive days in 1855 indicate that its entrées (called “side dishes”) also changed every day. The meat dishes are shown under the headings “roast,” “boiled,” and “cold dishes.” On December 10 of that year, a new item labeled “Chickens-Goose” was added to the usual roasts on the menu. 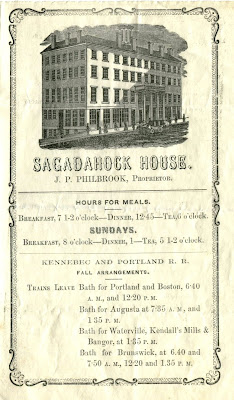 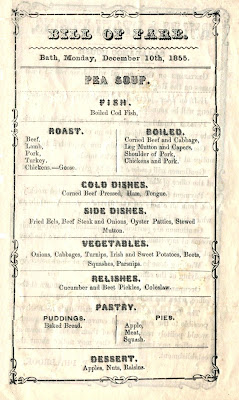 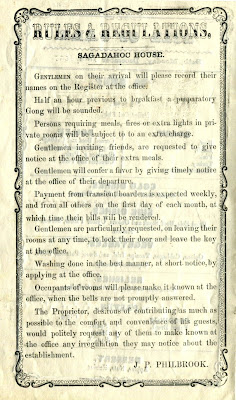 The roast chickens and goose are not on the menu below from the following day. The line where they appeared is now blank, showing that a space was held in reserve for such last-minute additions. The names of the other roasts and boiled meats remain locked in the bed of the letterpress, raising the question as to whether these dishes were really available or just part of the boilerplate text, much like the meal times, house rules, and transportation schedules. The unvarying list of meat dishes may have simply helped fill the page, making the bill of fare appear more bountiful—not a bad ploy considering room and board were included in the daily rate. 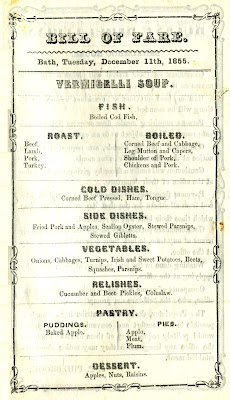 By the 1850s, table d’hote menus had become an integral part of everyday life. Perhaps this section of the menu was meant to be interpreted as dishes that could be available on any given day. If so, it is not unlike the subtle forms of puffery on menus today. “From the beginning there was always a gimmick,” observed culinary writer John Mariani in the opening of his social history America Eats Out. Still, finding the gimmick is not always easy, even when hiding in plain sight, for it is often buried deep in the culture.

Henry -- Good observations! I've often read complaints about waiters informing guests that various menu offerings were "all out." I've also seen accounts of how at the sound of the gong hotel guests, who had gathered impatiently at the dining room door, rushed in like starved animals. It must have been a wild scene.

The gimmickry is alive and well! My wife did her culinary externship at a restaurant here in Austin famous for its specialization in game. Among the elk, moose, nihlgai, rattlesnake, and other exotic meats, the menu offered penguin. Anytime a guest tried to order it, the wait staff were instructed to say “we’re fresh out of that!”