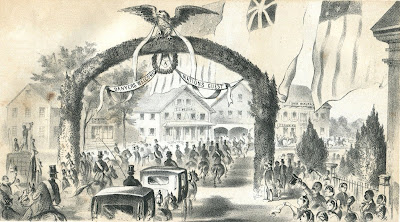 Nineteen-year-old Winslow Homer illustrated this lively scene showing the celebration for London-based financier George Peabody in South Danvers, Massachusetts in 1856.1,2 Peabody  returned to his hometown to dedicate the library he had recently donated. In addition to his largess, Peabody helped improve the relationship between the United States and Great Britain which had been in the doldrums since the War of 1812. Charitable giving and diplomatic efforts naturally lead to banquets, both given and received. Seven menus recall key moments in the life of this great man whose generosity continues to benefit society.

Social Emergence
Born into a poor family in 1795, Peabody began his career in the dry goods business and later went into banking. In 1837, he moved to London where he amassed a fortune as an international banker. On July 4, 1851, Peabody hosted a banquet, concert, and ball for Abbott Lawrence, the American ambassador to the Court of St James’s. The dinner was held at Almack’s Willis Rooms in London. The elegant affair that signified Peabody’s social emergence was attended by members of the British aristocracy, including the 82-year-old Duke of Wellington, the venerable hero of Waterloo. 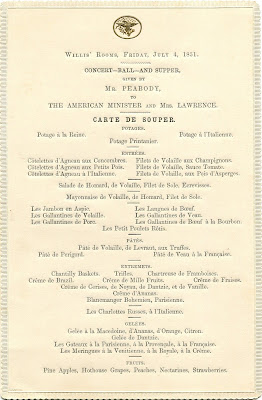 The Great Exhibition
The Great Exhibition in 1851 was officially named The Great Exhibition of the Works of Industry of All Nations. One nation that could not get its act together was the United States which reserved four times the space it needed and then refused to provide the funds to mount the exhibit. Peabody stepped in and paid for the American-made products to be transferred from the warehouse and put on display in the Crystal Palace, the enormous glass building that housed the fair in London’s Hyde Park. 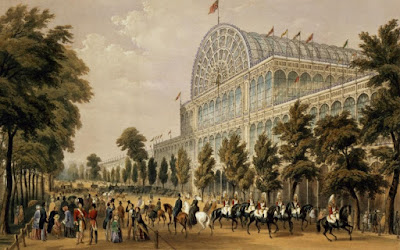 Although the extra space gave the American Pavilion an empty look, the exhibit sent a clear message—the United States was a growing industrial force. The products included Alfred C. Hobbs’ unpickable lock, Cyrus McCormick’s reaper, Richard Hoe’s printing press, and Samuel Colt’s revolver which represented a leap forward in precision manufacturing. Produced using templates and measuring tools in conjunction with powered, repeatable metal-cutting machines, the Colt revolver featured interchangeable parts, unlike the components being handcrafted in Europe which were unique to each gun. When the Great Exhibition ended in October of that year, Peabody entertained the jubilant American industrialists at the London Coffee House. The banquet was front page news in the United States. 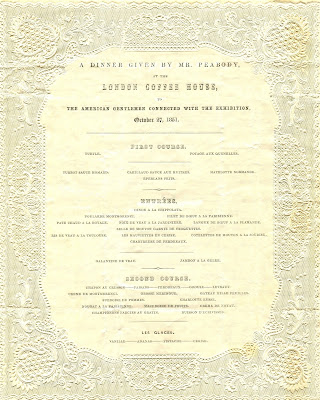 Anglo-American Friendship Banquets
In May 1853, Peabody held a dinner for the outgoing U.S. ambassador, Joseph R. Ingersoll, at the Star and Garter Hotel on Richmond Hill, overlooking the bucolic Thames Valley outside London. The distinguished guests included former President Martin Van Buren, an epicure who had once served as the American ambassador. The menu below was printed on quarto lace paper by the stationer Dobbs, Bailey & Co. 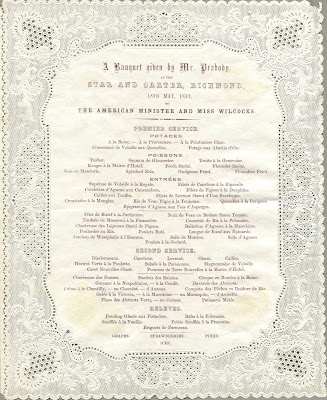 Afterward, some of the leading opera singers of the day performed arias by Rossini, Donizetti, and Verdi. 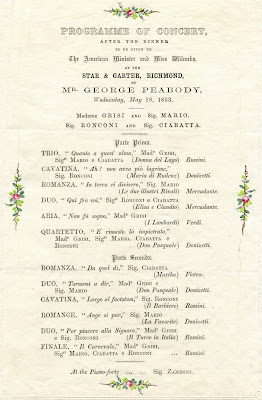 Peabody offended many of his American guests at a similar dinner on July 4, 1854, when he toasted Queen Victoria before President Franklin Pierce. Ambassador James Buchanan, Pierce’s future successor, abruptly departed in a huff. It was during this year that Peabody took financier Junius Spencer Morgan as a partner, creating a joint business that eventually became J. P. Morgan & Co.

Peabody Institute Library
Driven by memories of an impoverished childhood that provided for little schooling, Peabody funded mostly educational projects in the United States. In 1854, the Peabody Institute Library opened in South Danvers, Massachusetts, and two years later, he came to see the new building amidst much fanfare. Dignitaries at the event wore ribbons, such as the one below promoting the value of education.

Joshua B. Smith, an African-American caterer in Boston, supplied this late afternoon repast for the multitudes that were served in a tent set up adjacent to the library. 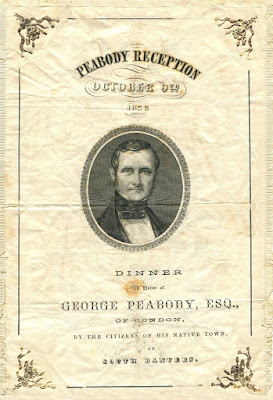 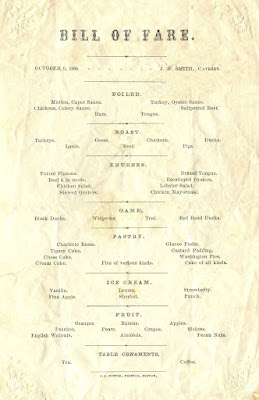 Birthday Celebrations
Now widely regarded as the father of modern philanthropy, Peabody focused his charitable giving in Britain on housing for the poor. In 1862, he founded the Peabody Donation Fund (now the Peabody Trust) which is still one of London’s largest housing associations, comprising about 55,000 properties. However, Peabody still continued to give generously on both sides of the Atlantic, and in February of that year, his hometown held its sixth annual celebration of his birthday. The menu below includes wild hickory nuts called shagbarks and “pure” California port and white wine.3 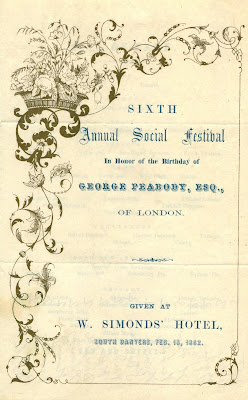 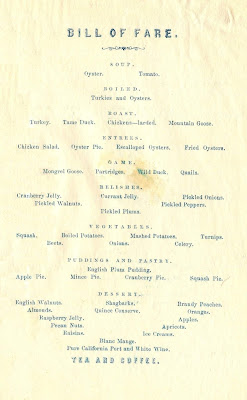 By the time South Danvers held its thirteenth annual celebration of his birthday in 1869, the town had been renamed Peabody in his honor. 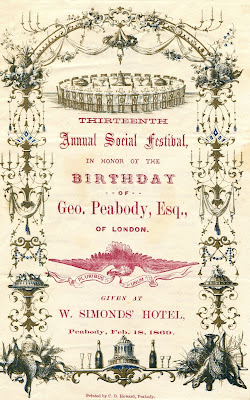 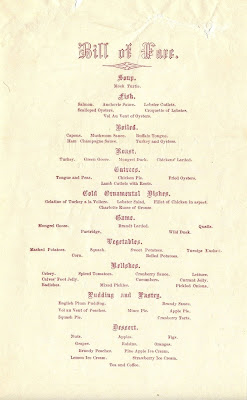 When Peabody died later that year in London, he was given a funeral and temporarily interred in Westminster Abbey. The following year, Prime Minister William Gladstone ordered HMS Monarch, the largest ship in the Royal Navy, to carry his remains back to the United States so that he could be buried in Massachusetts according to his will.

Epilog
George Peabody established numerous educational trusts that still bear his name, winning him many admirers. The town of Peabody marked the centennial of his birth at a banquet in 1895, while in the grips of a harsh economic depression. 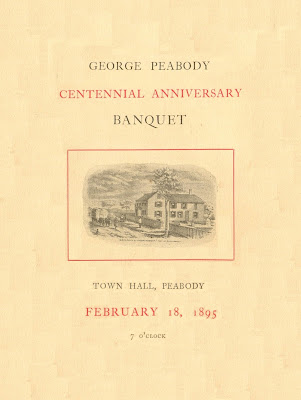 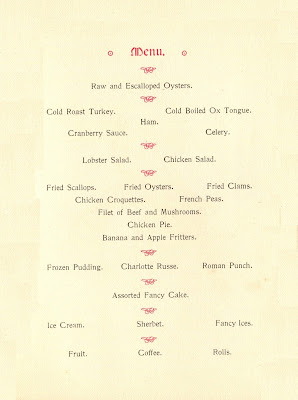 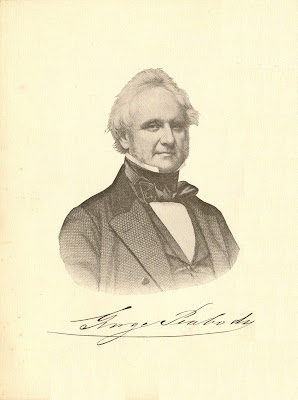 Notes
1. “Proceedings at the reception and dinner in honor of George Peabody, esq. of London, by the citizens of the old town of Danvers, October 9, 1856. To which is appended an historical sketch of the Peabody institute, with the exercises at the laying of the corner-stone and at the dedication.” Boston: H. W. Dutton & son, printers, 1856.
2. Two plates have been identified as the first book illustrations by Winslow Homer (American, 1836–1910): “Lexington Monument, S. Danvers, and Residence of Hon. R.S. Daniels,” which is shown above, and “Arch at Danversport, near the Baptist Church.” The book also has illustrations by M. C. Oby (American, 19th century) and lithographs by Leopold Grozelier (French American, 1865–1907), Lodowick H. Bradford (American, active 1845–1859), and John H. Bufford (American, active 1835–1871).
3. Ivory-colored shagbarks are buttery and sweet, somewhere between a pecan and walnut which are in the same family.
Posted by Henry Voigt at 9:50 AM

Quite a collection! It's funny how excessive these banquet menus seem now, even the relatively pared down one from 1895.