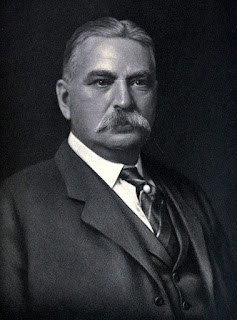 John W. Gates (1855-1911) was a steel magnate, financier, and gambler. He became widely known as “Bet-a-Million” Gates after falsely claiming to have bet a million dollars on a horse race in England. Nevertheless, he did gamble large amounts and would bet on practically everything. From 1894 onwards, Gates maintained a suite at the Waldorf-Astoria Hotel where he conducted high-stakes poker parties and baccarat games. A hotel account book shows that the storied capitalist and his wife were in residence on Christmas in 1905 when they hosted two dinners. Oddly, the cost of the meals was not recorded.
Born and raised in what is now Chicago, Gates sold barbed wire when it was still a relatively new product. The life of a traveling salesman also provided ample opportunities to test his aptitude for cards and other games of chance. He later founded a company to manufacture barbed wire, which eventually led to the production of steel. However, when financier J. P. Morgan, Jr. purchased his company to be part of U.S. Steel, Gates was not invited to be part of the company. He never forgot the snub and fought back at Morgan through a series of business maneuvers for years afterward. Gates was riding high in December of 1905, after merging Republic Iron and Steel, the Tennessee Coal, Iron and Railroad Company, and two other iron producers. The combination produced rails by the open hearth process that were twice as good at those made by rival U. S. Steel using the Bessemer process. The new company had more orders than it could fill, giving Gates more than enough reason to celebrate.
It appears that maître ďhôtel Oscar Tschirky wrote down the particulars of special events in his account book while meeting with the host or hostess. It is telling that both of these menus are written in English, rather than in the usual French. Many wealthy industrialists and socialites regarded Gates as an uncouth and crude westerner. The gathering he held on Christmas Eve was probably a festive, if not raucous affair, given that he and his guests were often loud and boisterous. The late buffet supper for eighteen featured consommé, lobster cutlets, chicken salad, assorted sandwiches made with rillettes, and three dozen small hot roles of the kind seemingly favored by Mrs. Gates, as well as ices, cakes, and eggnog. 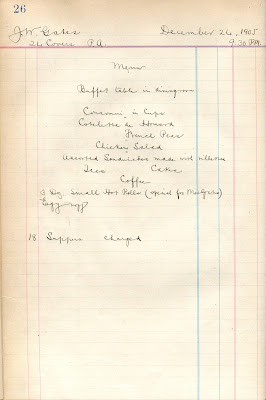 The dinner for nine on Christmas night was also straightforward. The unfussy cuisine included oysters, striped bass, suckling pig, roast turkey, “Santa Claus ice cream,” and a plum pudding supplied by Mrs. Gates. Possibly made well in advance, the plum pudding may have had symbolism beyond the holiday, since it was customary for everyone in the family to stir it once for good luck, a tradition that an inveterate gambler might find hard to pass up. 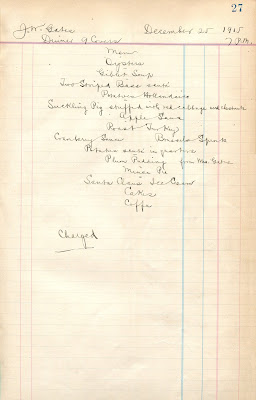 George Boldt, proprietor of the Waldorf-Astoria, was said to have once snobbishly remarked, “I would rather have Mrs. Astor sitting in my Palm Garden and drinking a cup of hot water than Gates in there eating the costliest dinner I could serve him.” Interestingly, there is no cost shown for either of these dinners. The only other such events were hosted by George Boldt and members of his family. What is more, the word “charged” is used instead of the typical “RC,” meaning room charge for those staying at the hotel. The question of who was charged, and by what amount, was not recorded. Perhaps George Boldt or Oscar Tschirky covered this expense, having lost a wager with “Bet-a-Million” Gates.
Note:
1. As the president of Republic Steel, Gates was instrumental in changing the steel industry’s production methods to the open hearth process. He also organized the Texas Company (now known as Texaco) and played a key role in building the city of Port Arthur, Texas. In New York City, Gates provided the funding for Luna Park (1903) in Coney Island, the Hippodrome (1905) which was called the world’s largest theater by its builders, and the Plaza Hotel (1907) where he had a 16-room apartment.
Posted by Henry Voigt at 2:40 PM

Thank you! What a fascinating article!