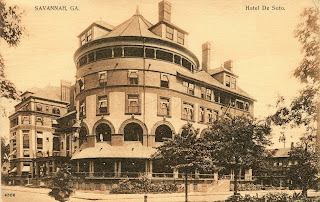 The message inscribed on the back of this postcard from the De Soto Hotel in Savannah, Georgia closes with the exclamation, “Plenty sight-seeing!” Unfortunately, the guest did not mention what he or she had seen in 1907 that prompted the enthusiasm. Tourist sights change over time based on the evolving interests and needs of visitors. A menu from this hotel provides a clue, revealing at least one of the local attractions at the turn of the last century.
The De Soto was the finest hotel in town. The menu below from February 1896 may have been for the main meal of the day, even though it is called “lunch.” The bill of fare is indistinguishable from table d’hôte menus at similar hotels in other regions. The dishes are presented in twelve typical sections—soup, raw relishes, fish, pickled relishes, boiled meats, entrées, roast meats, mayonnaise salads, cold meats, vegetables, dessert, and fruit. Given the season and nature of the establishment, it would not have been unusual to also offer a game course. More surprisingly, there is no ice cream dessert, which was de rigueur at top-tier hotels, although occasionally absent on menus in the South where dairy products were generally less abundant. Standing in stark contrast to the lavish repast, the other side of the menu features a photograph titled “Negro Cabins on Bonaventure Drive” in the guise of a quaint scene. In the late-nineteenth century, the nascent middle class aesthetically perceived such images of squalid living conditions as picturesque, perhaps owing to their precarious position between the extreme wealth and poverty of the time. Nevertheless, photojournalism was then raising awareness among the urban bourgeoise about their obligations toward the disadvantaged classes, laying the groundwork for the Progressive Era. Some of the most powerful photographs were taken by social reformer Jacob Riis who brought public attention to the slums of New York in a book titled How the Other Half Lives (1890). 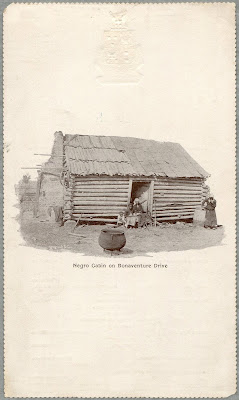 Today, one of the most frequented tourist destinations in Savannah is the First African Baptist, the country's oldest black church where visitors can still see holes in the floor boards that provided air for slaves in hiding on their journey to freedom on the Underground Railroad.
Posted by Henry Voigt at 10:09 AM

As usual very interesting. Many thanks from Down-under

Thank you for the great commentary about and historical insights into our American culture you've given us over the years -- all done with menus! Who knew? You did, that's who.

The little bits of French on the menu strike me as kind of funny, as do the turkey wings.