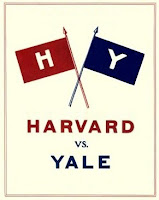 The “deafening drone of vuvuzelas” won’t be heard at the 127th football game between Harvard and Yale this weekend. According to Bloomberg News, Harvard banned the plastic horns to avoid disturbing the players, marching band, and fans. The news report brought to mind writer Elbert Hubbard’s observation that football is “a sport that bears the same relation to education that bullfighting does to agriculture.” Indeed, the customs and traditions surrounding football have always been a reflection of popular culture, not higher education. Five menus from dinners in Boston after the Harvard-Yale games from 1909 to 1927 reflect many of the broad changes in American society over that period.

This menu, featuring a hand-colored illustration on the cover, comes from Young’s Hotel  in 1909. After opening on Court Street in the financial district in 1860, Young’s became a favorite destination for Harvard students who enjoyed playing billiards. 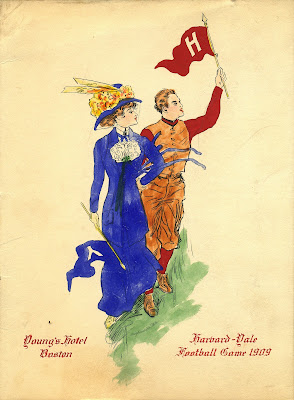 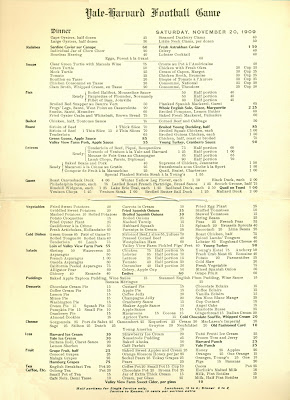 Long a bastion of upper-class Boston, the Parker House on School Street also hosted celebrations after Harvard games. The bill of fare below from 1913 is surprisingly similar to the one above from Young’s Hotel, perhaps due to the fact that both hotels were under the same management. Although there is no discernible change in the food and format, a comparison of the cover illustrations reveals that an important social transformation had taken place over the intervening four years. 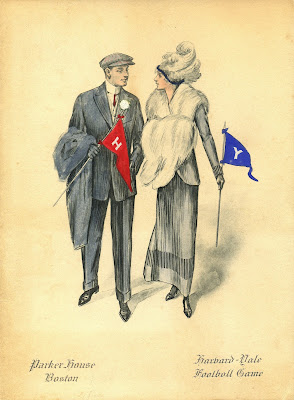 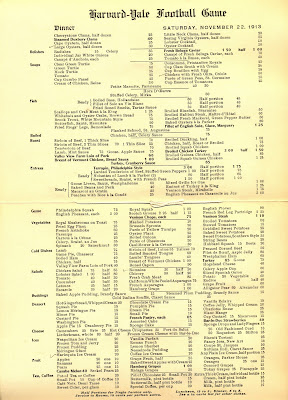 A side-by-side comparison of the illustrations shows the metamorphosis. Years later, writer Virginia Woolf noted that “on or about December, 1910, human character changed,” commenting on how human relationships evolved at around this time. The illustrations suggest that there was something to Woolf's observation. The woman in 1909 appears self-assured but aloof. Her vague, unfocused expression represents the feminine ideal of the fin de siècle. (This look, popularly known as the “Gibson Girl,” was named after artist Charles Dana Gibson’s illustrations that personified the image.) By contrast, the woman in 1913 stares straight at the man. Describing the era, journalist Henry Allen wrote, “Women ignore their mother’s lessons on how a lady appears in public. They slowly jettison corsets, shed chaperones, and hike their hemlines over their ankles. They face the camera with an amused wiseguy wariness. Sometimes, for mischief, they pose with cigarettes. The face of sublimity starts to become the face of sexuality.”2 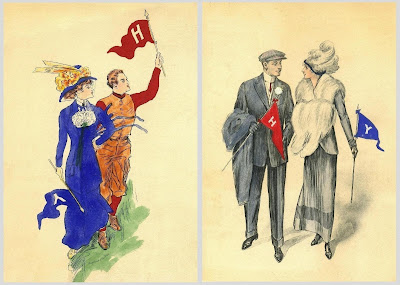 The country was crazy about college football during the 1920s, when a much broader segment of the population was following the sport. An “Our Gang” silent movie titled “Yale vs. Harvard” was released in 1927, the same year as the next three menus from the annual game.

There were also major changes in the restaurant industry, sparked by Prohibition after it went into effect in 1920. Without the profits from wine and other alcoholic beverages, most of the best restaurants in the country closed. Although there was a marked decline at the top end, more people than ever were eating out in low-priced restaurants. In addition to luncheonettes and cafeterias, new kinds of eateries flourished, such as drive-ins, barbecue stands, and hamburger chains. It also became fashionable for restaurants to advertise simple, home-style cooking in clean surroundings. Capturing the spirit of this type of dining establishment, comedian W. C. Fields advised, “Never eat at a place called ‘Moms,’ but if the only other place in town has a sign that says ‘Eats,’ go back to Moms.”

Despite the low culinary standards of the 1920s, the best hotels prospered. The menu below from 1927 shows the new Parker House building which opened earlier that year. 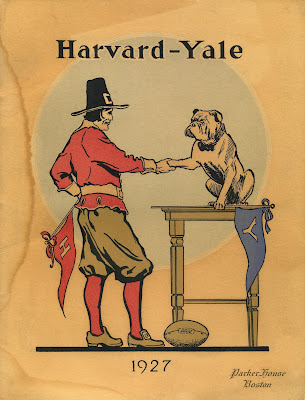 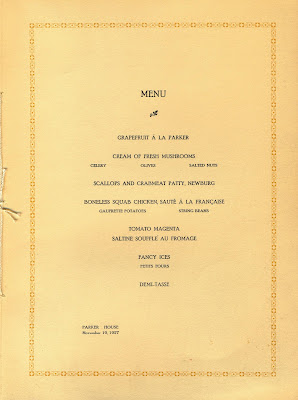 There were also enormous changes in transportation during this eighteen-year period. In 1909, Wilbur Wright completed a 42-mile flight around Manhattan; in 1927, Charles Lindbergh flew solo across the Atlantic. By that year, Henry Ford had sold over 15 million Model-Ts and millions of people were flocking to showrooms to see the new Model-A. The menu below comes from the Suntaug Lake Inn, located fifteen miles outside of Boston, by now only a short drive from the game. 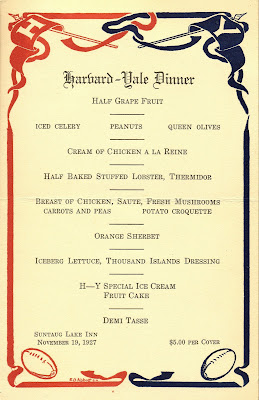 The menu below, designed by sports illustrator Charles Donelan, comes from the Club Karnak in Boston. 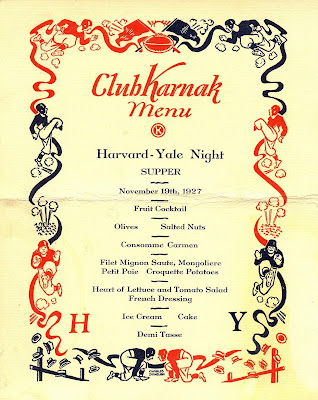 Looking back, 1927 was a memorable year in sports. Baseball legend Babe Ruth hit sixty home runs for the New York Yankees, and in boxing, heavyweight champion Jack Dempsey floored Gene Tunney in a rematch, while still losing the decision. It was also the year that marked the last of Yale’s eighteen national football championships.