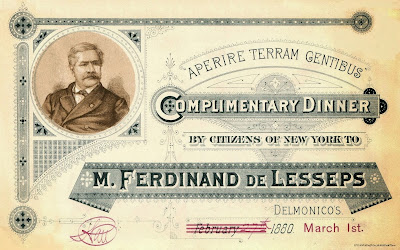 In the preface of his 1894 cookbook The Epicurean, Delmonico’s chef Charles Ranhofer cited seventeen grand banquets as being particularly memorable.1 One of these dinners had been held fourteen years earlier for Count Ferdinand de Lessep, the French entrepreneur who built the Suez Canal. Eager to replicate his engineering feat, De Lesseps came to New York in March 1880 to raise money for a sea-level canal that would cut across the Isthmus of Panama. As was customary, a banquet was held in his honor. However, as far as the French-born chef and his brigade were concerned, their famed countryman was more than just another special guest. To them, he was a hero of the age. Observing a palpable excitement in the air during dinner, the reporter from the New York Times wryly noted that “the nationality of the distinguished guest of the evening had had something to do with the zeal of the cooks, confectioners, and waiters.”2

On New Years Day of that year, De Lessep symbolically began work on the canal by digging the first shovel of sand and dumping it into a Champagne box. Transoceanic waterways were regarded as essential to expanding free trade, and this was reflected by De Lesseps’ family motto Aperire Terram Gentibus, meaning “To Open the World to all People.” This motto, which was adopted by the Compagnie de Suez, appeared on the menu, as well as the admission ticket shown above. Although the United States liked the idea of free trade in theory (and in practice when it favored the country), the prospect of a French canal in the Western Hemisphere caused consternation in Washington. Remembering that it had only been a decade since Napoleon III tried to make Austrian Archduke Ferdinand Maximilian the emperor of Mexico, President Rutherford B. Hayes was suspicious of this project, bluntly declaring that “a canal across any part of the Isthmus is either a canal under American control, or no canal.” 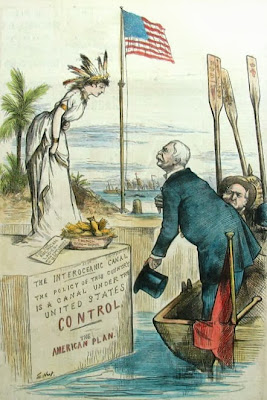 Despite the political posturing, the banquet for De Lesseps was fully subscribed by 250 wealthy and powerful men, including the industrialist Andrew Carnegie. Constructed in a manner befitting this august assembly, the bill of fare was engraved on a gilt-edged card that was then attached to a fringed swatch of satin with a silk ribbon.3 This expensive menu design, which was in vogue in New York for about five years during this period, was reserved for only the most important banquets. The blue menu shown below is in the NYPL collection. 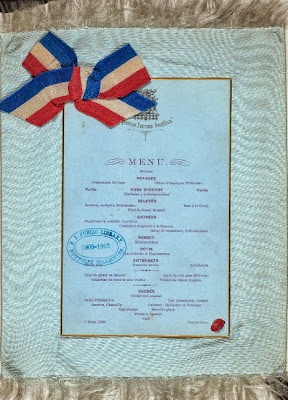 The menus at the dinner appeared in various colors, as evidenced by this brown card tatted on maroon satin in my collection. 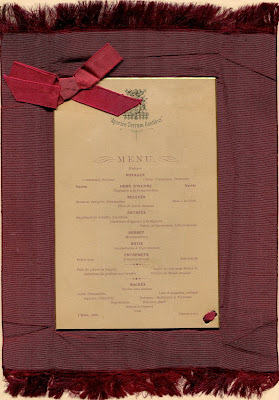 The lavish bill of fare includes some of the typical American foods that were de rigueur in the nineteenth century, such as oysters, and Canvasback duck which invariably appeared at the finest banquets. In addition to these customary fixtures, there are several particularly rich dishes that were seen much less often. One example is supremes de volaille Lucullus, a chicken entree named after Lucius Licinius Lucullus, a prominent epicurean of the late Roman Republic. After baking a buttered chicken breast in paper, this entree was garnished with truffles, “tongues balls” (comprising half-inch spheres of finely-chopped beef tongue), and capon kidneys, mixed with a béarnaise sauce that was finished with meat glaze. 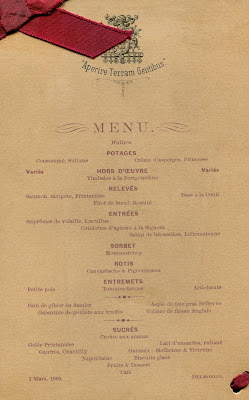 Another calorific dish is filet de bœuf Rossini. Named after the opera composer Gioachino Rossini, this was a filet of beef topped with hot foie gras and a slice of truffle, and served on buttered spheres of bread with a truffled Madeira sauce; it was the sauce that gave these dishes a dimension now called “big flavor.” This classic dish, known as tournedos Rossini in the twentieth century, became a standard at French restaurants in the United States during the 1950s, and stayed in fashion until the mid- to late-1970s, when sauces were lightened in accordance with the dictates of nouvelle cuisine.4

Following the usual protocol, dinner was served over the course of two and a half hours, beginning at 7:00 in the evening. At 9:30 PM, the six long tables were cleared of the large decorative sculptures of confectionery that had been skillfully crafted for this occasion, depicting Monsieur De Lesseps and the triumphal moments in his life. Once all the diners had an unobstructed view of the dais, except for the haze of wisteria-colored cigar smoke that typically hung in the air at these convivial gatherings, it was time for the speeches to begin.

Shortly after this banquet, De Lesseps went to Washington to meet with President Hayes and testify before Congress. His canal project proceeded, but eventually failed, devastated by epidemics of malaria and yellow fever and recurrent landslides. The bankruptcy sparked a scandal in France. De Lessep was ordered to pay a fine and even came close to being thrown in jail. He died in 1894, a few months after Chef Ranhofer published his 1183-page cookbook, revealing how he prepared the grand banquets of the Gilded Age.5

Thanks so much for this. My biggest complaint about the NYPL's collection online is that they are too small and you can't read them –– what is the point??? Yours are beautifully scanned and readable which is sort of the point of having them. I wonder if there were 2 classes of menus with your brown silk for the lesser players and the gold edged ones for the high rollers?

They did pull out all the stops, didn't they? I've always wondered if all the foie gras in the US was canned or if it was brought over from France in a relatively fresh state??

Great piece and a stunning menu

Great post. Very informative on all fronts. Thank you!