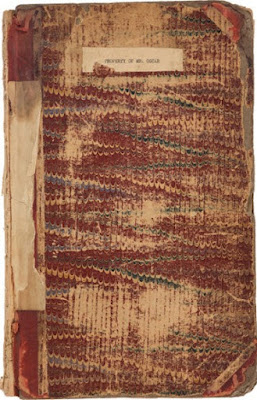 This manuscript account book, bearing a typed label reading “Property of Mr. Oscar,” recently came into the collection. The 300-page volume is written in the hand of Oscar Tschirky, the famed maître ďhôtel at the Waldorf-Astoria. It contains the particulars of private events at the hotel from mid-December 1905 to mid-May 1906, including the date, organization, number of guests, bill of fare, and cost. The manner in which the name is expressed on the cover and its worn condition indicates the culinary staff may have referred to it as part of their daily routine. My first step in processing this wealth of social information was to compare the entries for two dinners with menus already in the collection. 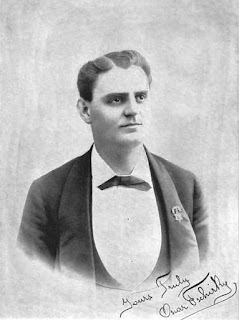 Oscar Tschirky was born in 1866 in the Swiss city of La Chaux-de-Fonds in the Jura mountains. On the day he arrived in New York in 1883, he got a job as a busboy at the Hoffman House, one of the finest hotels in the city. In addition to being fluent in French and German, the young restaurateur displayed a talent for cosseting the rich and powerful industrialists. He rose rapidly in the upper tiers of the hospitality trade, becoming the headwaiter of the private dining rooms at Delmonico’s in 1888. It was during that year he began to keep a record of the special menus he planned.1 In 1893, Tschirky asked his aristocratic patrons for references so that he could secure a similar position at the new Waldorf Hotel where he would become known by his first name, either as “Oscar of the Waldorf” or as “Mr. Oscar” to those who worked for him. 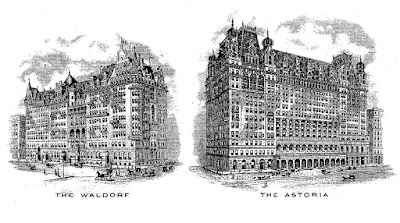 When the Astoria Hotel was completed in 1897, it was immediately connected to the four-year-old Waldorf, creating the largest hostelry in the world. At the Waldorf-Astoria Hotel, Oscar orchestrated luncheons, teas, dinners, late suppers, and huge banquets, much as he had done at Delmonico’s, only on a greater scale. In addition, he now assumed the mantle of being the social gatekeeper of high society.

January 18, 1906
Holland Society of New York
One of the major events of the social season was the annual dinner of the Holland Society, an upper-class hereditary association established in 1885, when increases in immigration sparked widespread nativist sentiment. As shown on page 83, its twenty-first anniversary banquet was attended by 472 members at a cost of $4.00 each, or about $115 today. Other expenses included a light supper for nine musicians ($12), decorations for the guest table ($25), and a few other items. A note states that the cigars were to be passed out “just before the sorbet;” the reek of stale cigar smoke was one of the most prevalent odors of the era. Although only men were allowed to attend this dinner, women were invited to watch from the boxes in the ballroom where they were provided a light collation of chicken salad, fancy ices, and cakes. In accordance with the customary practice, the cost to feed the 169 women who witnessed these proceedings was $169, or $1.00 each. The claret punch and various wines provided for the “ladies” and musicians added $76.05 to the bill, bringing the total to $2168.05. 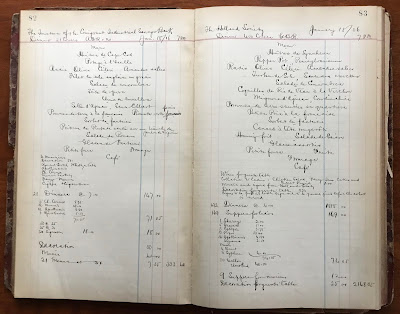 While Oscar wrote most of the menus in French in his account book, the bill of fare at this dinner appeared in French and Dutch. The 44-page booklet below is primarily filled with the names of the attendees. It was not unusual for hereditary associations to list the names of its members in their mementos. Showing who was in, and by inference who was out, reflected the social exclusion that once laid at the heart of such organizations. Still, they maintained friendly bonds with kindred groups. Representatives from the Sons of the American Revolution, the Society of Colonial Wars, the Friendly Sons of St. Patrick, and the St. Andrews Society were seated at the guest table on this occasion. 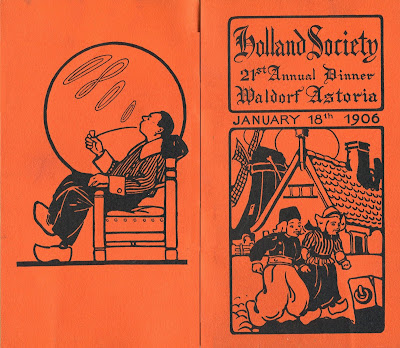 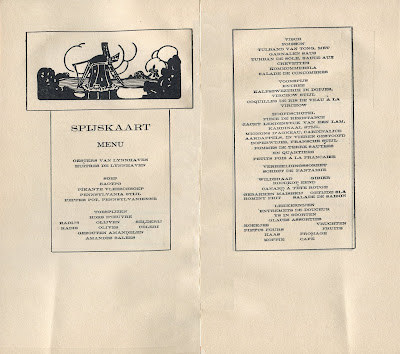 The after-dinner speakers and press played to the balcony where the women were seated. The New York Times reported, “The boxes were filled, as always at Holland Society dinners, with what (one speaker) referred to as ‘that glittering galaxy of stars that shine from our heaven on the radiant scene below.” Another orator began his remarks by saying, “It’s always one’s duty to start off with a greeting to the ladies. Woman was made from Adam’s rib, which was taken from him from his sleep, and I want to say right here that I have no sympathy with that cynic who said that thus ‘man’s first sleep was his last repose.’” Whether the female spectators found this joke amusing is not known, but the newspapers did report that the most rousing cheers of the evening came with every mention of President Theodore Roosevelt, the nation’s most prominent Dutch descendant.

January 25, 1906
German Charity Ball
The German Benevolent Society supported hospitals, dispensaries, and other charitable agencies. Its sixteenth annual ball was a massive affair that filled the public spaces at the Waldorf-Astoria, including the Myrtle Room, Astor Gallery, and Grand Ball Room which featured an electric sign with the word “charity” that the hotel hung on the wall at such fundraisers. Page 101 of the account book only lists a few of miscellaneous items, such as 15 dozen sandwiches and 3.2 beer for the musicians, presumably so they wouldn’t become tipsy during their performance. A note states that one of the organizers would provide Rhine wine and seltzer for “the Hungarians” and supper for 25 maids in the Nurse’s Hall, which seemingly was used as a child care center. Although Oscar occasionally toyed with the idea of charging for the use of the electric sign, he wisely decided against it, choosing instead to charge $75.00 for the coat check room. Even with that, the total was a mere $133.80. 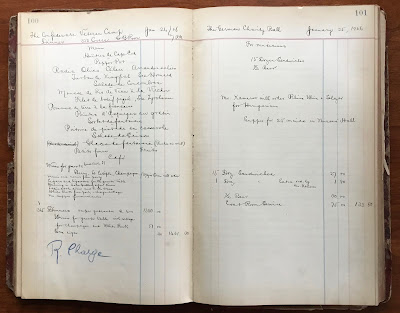 The à la carte menu below shows that the ball-goers covered their own expenses for refreshments and dinner. This card reflects the usual mix of French, English, and German dishes, as well as more pricey options like Chesapeake terrapin and Canvasback duck, the highly-prized American delicacies that were becoming increasingly scarce. 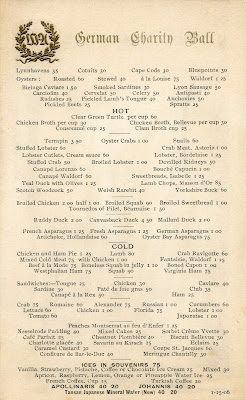 Even though menus provide additional historical evidence, account books offer a more holistic view by documenting all of the social activity in a given period, including the special events that did not warrant a printed menu. One of the things you notice when paging through this compendium is the degree to which the Waldorf-Astoria was a gathering place for women at the turn of the last century. When put into context, the large banquets that consigned women to the balcony may have been progressive at the time, an interesting idea to be further explored.


Note:
1. Karl Schriftgiesser, Oscar of the Waldorf. New York: E. P. Dutton, 1943. This journal, which may be the only extant copy from the series, contained a loose leaf dated November 1903 from an earlier notebook.
Posted by Henry Voigt at 3:45 PM

Henry, You were the perfect person to acquire this treasure!

Henry, you are the menu detective extraordinaire!
Great job of presenting a picture of early 20th century society.

I hope you bid on it -- what a divine piece of history! Such a pleasure seeing these pages. thanks