Church suppers were commonplace occurrences during the nineteenth century, both as social gatherings and a way for women's groups to raise money. Around 1886, church groups across the country began to use corn as a theme for their suppers. The short-lived fad seemingly came out of nowhere—it was not confined to the Corn Belt in the Midwest nor related to the harvest season.

Three menus show some of the corn dishes that were then prevalent.2 In addition to dishes made with corn, the word “corn” is used wherever possible—corned beef was served at all of these suppers. The Ladies of the Congregational Church of Keokuk, Iowa called their dish “corn beef,” while those in West Hartford, Connecticut embellished it as “corn fed corned beef.” 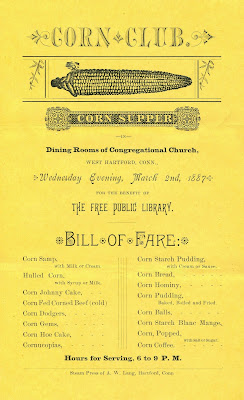 Regional traditions and personal preferences influenced how the corn dishes were prepared. While green corn and popped corn required minimal effort, other dishes entailed much more work. Hulled corn—described in 1890 as an “old-fashioned luxury” when prepared by the traditional process—was made by seeping corn in hot water and lye to loosen the hulls and remove the germs. The hulls were then soaked several times in fresh water to remove the lye, and finally boiled until soft.3 Hulled corn was eaten with milk, or butter and sugar. It was also ground down to produce samp, hominy, and corn mush. 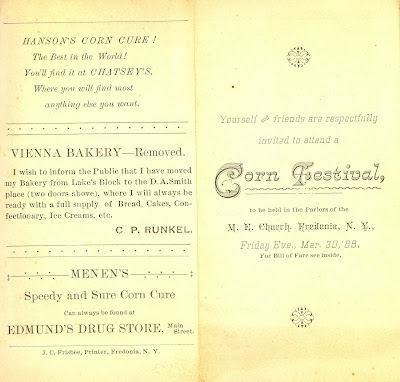 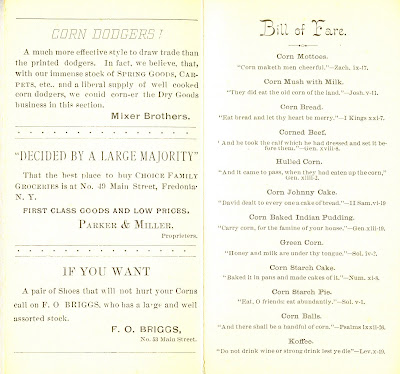 There was corn bread, of course, as well as corn gems, made with equal parts cornmeal and flour, and cooked in the small pockets of a gem pan. Corn johnny cake was a simple flatbread made from cornmeal, water, salt and sometimes sugar or molasses. The same ingredients were also shaped into small oval cakes and baked (or deep-fried like a hush puppy) to produce corn dodgers. Corn balls, one-inch balls made with whole grains, were also fried. Corn hoe cakes, also known as ash cakes or cornpone in the South, were originally baked on a hoe over a campfire in the fields.

Desserts with unappealing names like corn starch pudding, corn starch cake, and corn starch pie probably tasted better than they sounded. Indian pudding, made from cornmeal, milk, molasses, and spices, was a common dish throughout the century. Candy corn would have made an easy addition to these menus, but the new confectionery made in Philadelphia was not widely distributed in the 1880s. Corn coffee and “koffee” were most likely plain coffee. 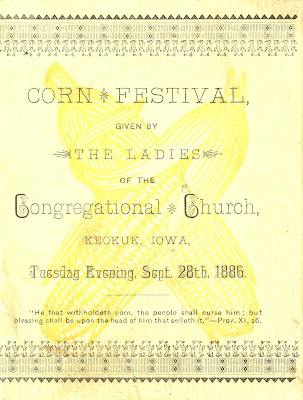 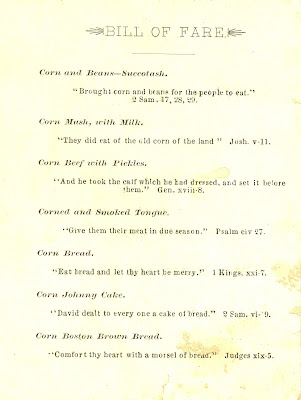 The corn fad did not last long. By the early 1890s, church suppers were being promoted as “Old Tyme Suppers” with the bill of fare written in Old English, reminiscent of the menus that were in vogue during the Centennial celebrations in 1876.


Notes
1. Seed catalogs contained jokes and anecdotes among the product listings in the late nineteenth century. The genre came to be known among farmers as corn catalog jokes or corn jokes. The term “corny” was reportedly first used by jazz musicians and jazz writers in the late 1920s.
2. The menu from the Congressional Church of Keokuk, Iowa is a fragment, having separated at the fold with only the first half of the menu surviving.
3. Estelle Woods Wilcox, The New Practical Housekeeping: A Compilation of New, Choice and Carefully Tested Recipes (1890) provides the traditional method for  preparing hulled corn. In the new process, corn was kiln-dried to separate the hull from the grain and then loosened and removed by machinery.
Posted by Henry Voigt at 9:41 PM