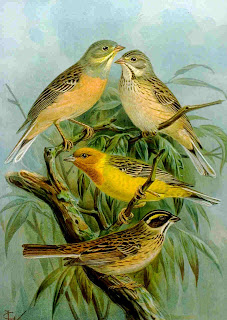 Ortolan is the French common name for a finch-like bunting that is a native of Europe and parts of Asia and Africa. Even though there are strict laws protecting these migratory birds, they are a great delicacy still being captured in nets in southwest France. Weighing less than an ounce, the tiny songbirds are first kept in a lightless box, prompting them to instinctively gorge on millet, grapes, and figs. Once the bird has quadrupled in size, becoming nothing more than a four-ounce lump of richly-flavored fat, it is drowned in Armagnac, plucked, roasted, and flambéed.


L’ortolan is eaten whole—wings, feet, and innards. Following the well-documented ritual, the diner drapes a linen napkin over his or her head to capture the aromas before crunching into the bird, oozing with ambrosial lipids. “It’s sort of a hot rush of fat, guts, bones, blood, and meat,” recounts food writer Anthony Bourdain, “and it’s really delicious,” still brimming with excitement after a secret dinner with a small group of French chefs in New York which was held expressly for the purpose of eating this endangered species.1 Even when it was legal, the ortolan rarely appeared on menus in the United States, and when it did during the nineteenth century, it was usually a less-expensive domestic species, although not always, as illustrated by two menus dating from September 1879.

The menu shown below comes from a banquet of the National Association of Fire Engineers at the Riggs House in Washington, D.C. Although it is listed as one of the roasts, this “ortolan” was almost certainly the sora, a small rail that lived in the swampy freshwater marshes in and around the nation’s capital.2 Although it is two to four times larger, the sora was then commonly called an ortolan, following the custom of naming species in North America after Old World groups, even when there were only superficial similarities.3 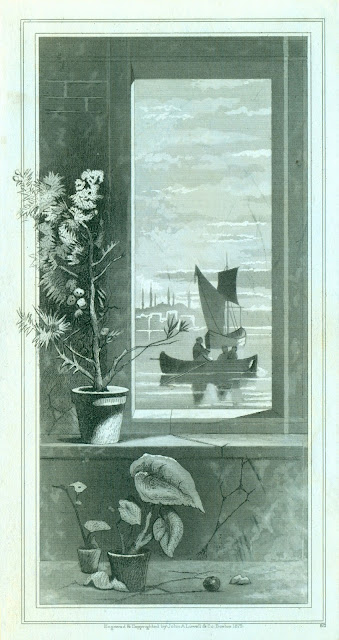 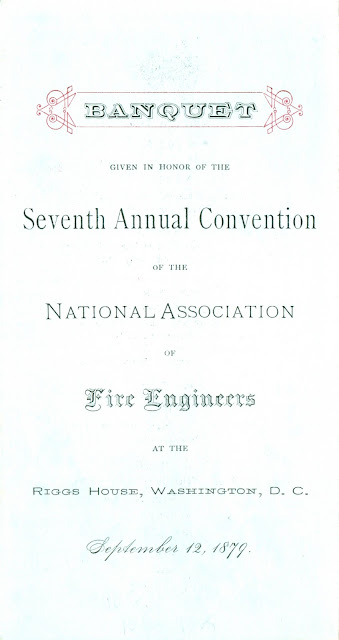 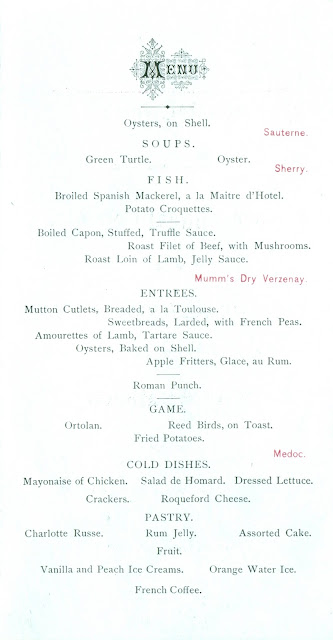 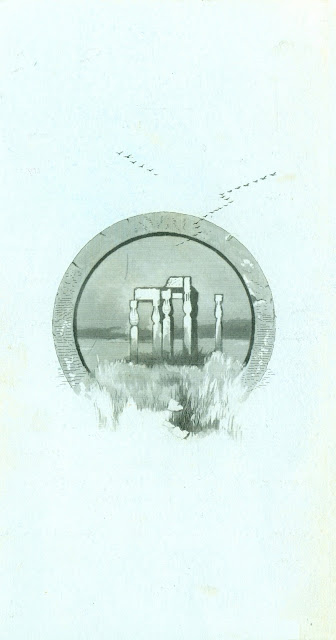 Another obsolete name on this menu is the “reed bird,” a small game bird of the open grasslands that is now called a bobolink. Weighing one to two ounces, the bobolink is only slightly larger than the ortolan. In fact, American epicures considered the rich flavor of the “extremely juicy” bobolink to be a close approximation of the ortolan of Europe.4 On a menu in the nineteenth century, the bobolink might be called a reed bird, a rice bird, or perhaps even an ortolan.

The menu shown below comes from an honoree banquet at Delmonico’s for someone simply identified as “H.” There seems to be no surviving account of this dinner, even though it may have been an important social event, as reflected by the venue, the high level of cuisine, and this costly menu. Composed of an engraved card tatted on a light blue satin backing, this design was occasionally employed at important banquets in the early 1880s, honoring prominent men of the Victorian era, such as French engineer Count Ferdinand de Lesseps, when he came to New York in 1880 to promote his plan to build a Panama Canal, and the British philosopher Herbert Spencer during his visit in 1882. 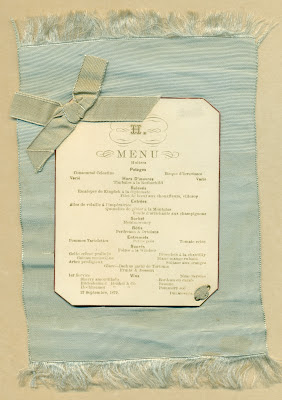 On the few occasions when ortolans appeared on a menu at Delmonico’s, they were bite-sized accompaniments to a larger roast bird. The dish on this menu called perdreaux & ortolans appears to be partridges, garnished with ortolans, perhaps similar to perdreaux flanques d’ortolans à la Stonington served at a banquet in 1891. Delmonico's also had a roast pheasant dish named faisons garni d’ortolans which appeared on a banquet menu in 1866. Chef Charles Ranhofer did not include the recipes for these dishes in his cookbook The Epicurean, indicating that they were seldom prepared. However, they were probably made with real thing, since Ranhofer did not use the word “ortolan” to describe his roast sora and reed-bird dishes.5 On the other hand, a soup in Delmonico’s repertoire named puree d’ortolans ou d’alouettes aux morons was routinely made with larks or reed birds. Although there is evidence pointing in both directions, it is probable that Ranhofer used ortolans imported from France for this lavish banquet in 1879.6

Old menus only show the names of dishes, without providing any information about the ingredients and preparation. In this case, the “ortolan” on the menu from Washington was probably the sora, a local game bird called by its common name, while the one on the Delmonico’s menu may have been the real thing. Extracting meaning from context and patterns of information, the art of culinary history is a form of speculative fiction, always open to reinterpretation and revision.7


Notes
1. The blood that Bourdain tasted may have been his own, for as you bite into the carcass, small bones reportedly lacerate your gums, causing your blood to mix with the flesh and juices of the bird. Some devotees claim that they can “taste the bird’s entire life as they chew in the darkness: the wheat of Morocco, the salt air of the Mediterranean, the lavender of Provence. The pea-sized lungs and heart, saturated with Armagnac from its drowning, are said to burst in a liqueur-scented flower on the diner’s tongue. Enjoy with a good Bordeaux.” Stewart Lee Allen, In the Devil’s Garden: A Sinful History of Forbidden Food, 2002. Other interesting accounts include Michael Paterniti's “The Last Meal,” Esquire (May 1998) and Anthony Bourdain's Medium Raw (2010.)
2. The game bird would have been purchased at the city’s large Central Market, only six blocks down Pennsylvania Avenue from the Riggs House, situated about equidistant from the White House and the Capitol Building.
3. Richard C. Banks, “Obsolete English Names of North American Birds and their Modern Equivalents,” U.S. Fish and Wildlife Service Publication 174.
4. Graham’s, “The American Sportsman,” Volume 46, Philadelphia, 1855.
5. The roast sora dish at Delmonico’s was named râle rôti à la mareille and roasted reed birds were called mésanges moustaches rôties. Charles Ranhofer, The Epicurean (1894).
6. This menu coincided with a recent change in the kitchen. Three years after retiring to France, Charles Ranhofer returned to Delmonico’s in 1879 as the chef de cuisine, once again assuming his duties as the one who “signed the menu,” using the parlance of the day.
7. William Gibson, Distrust That Particular Flavor, 2011.
Posted by Henry Voigt at 9:06 AM

You never cease to amaze me with your ability to penetrate the secrets of the past. Where did you get the material that compares the flavor of ortolans and reed birds. The late French president Mitterand chose a dinner of ortolans when he knew that his end was near. Those fine bones are used as a spoof in the movie Gigi, where her aunt instructs her on the gentile art of attacking them at table. Past friends of mine, about a half hour away from Biarritz, showed me their netting traps once used to catch these birds. Interestingly, they were still on the ground, in perfect condition, and only needed to be set. My experience with these gurus of rustic cuisine (although manufacturing executives when not on holiday,) is that one only alludes to the experience after one has been fully initiated into the circle.